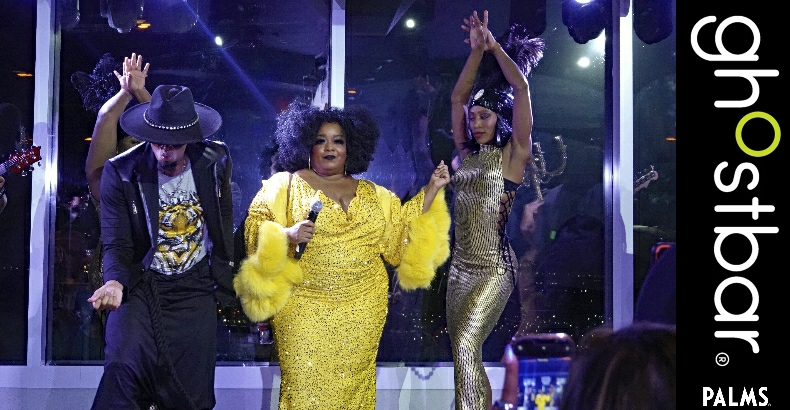 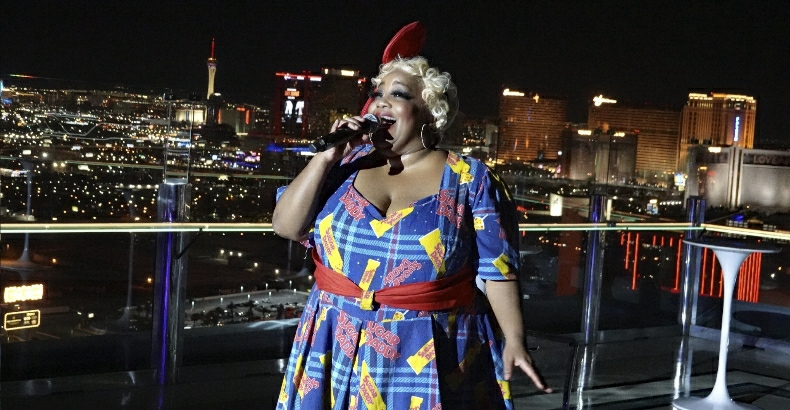 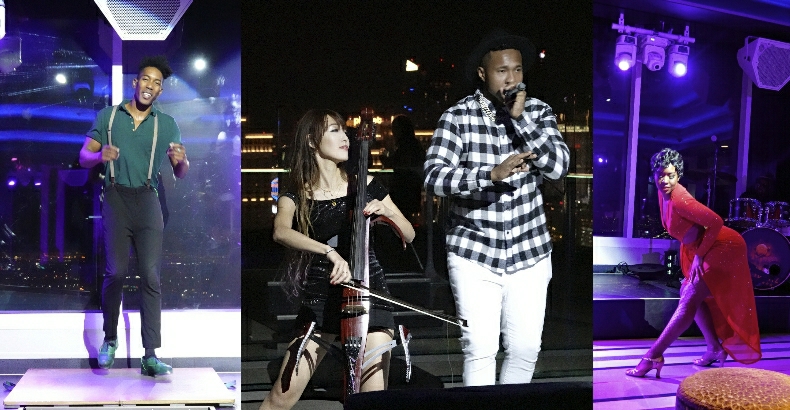 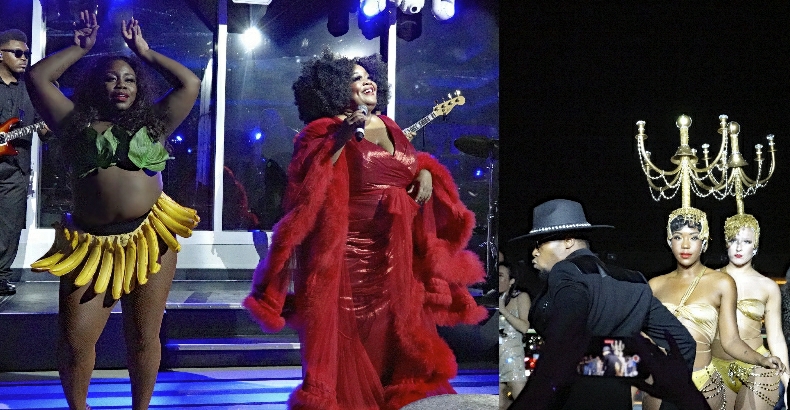 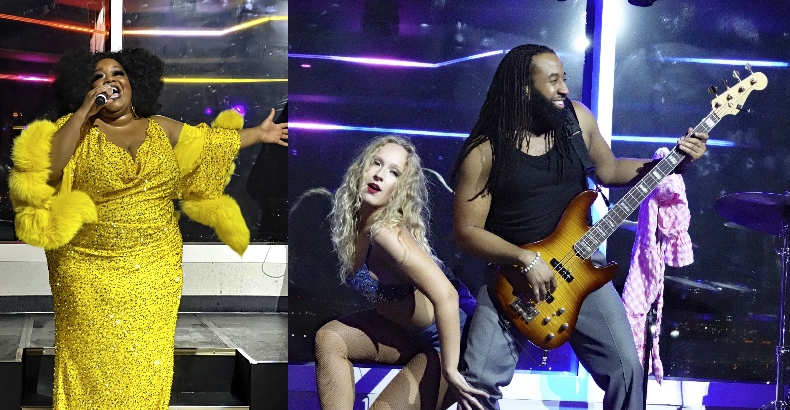 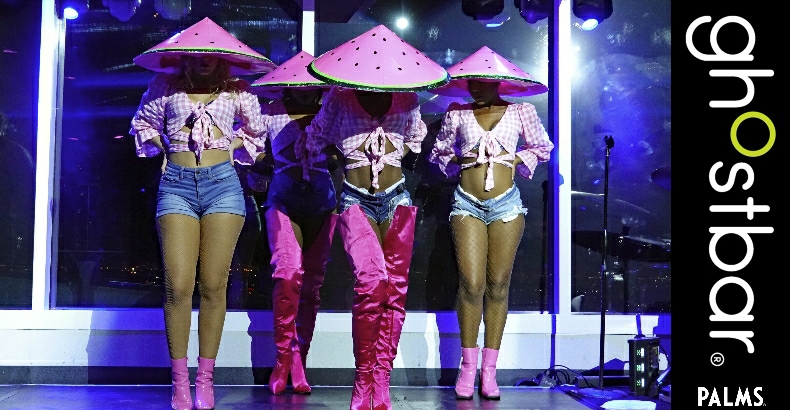 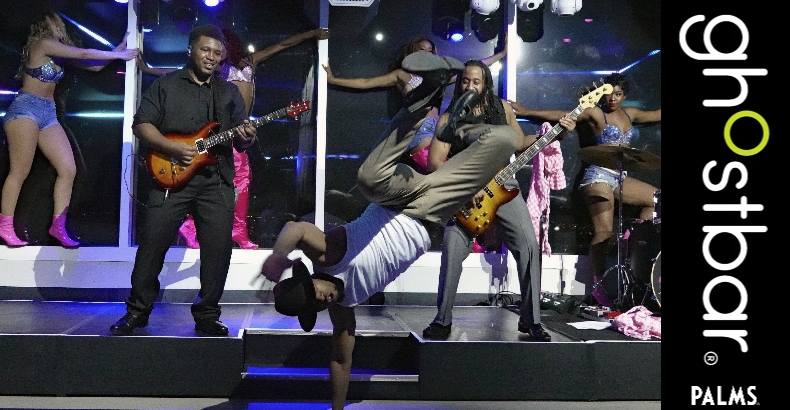 Friday was a big night at Palms Casino Resort.  Frankie Moreno had just kicked off his recurring monthly residency in KAOS; and, as a dazzling après, up at Ghostbar, the fabulous Skye Dee Miles was previewing her new residency show, Midnight Skye, which will celebrate its opening night, this Friday, August 05.

Miles has been thrilling Las Vegas audiences with her incredible vocal stylings since coming to town to star in Menopause the Musical at the Las Vegas Hilton (now Westgate Las Vegas).  Since then, the beatific singer with the golden pipes spent four years hosting Tropicana Nights at the Tropicana Hotel & Casino (now Tropicana Las Vegas), and in 2013 debuted her late-night show, Midnight Skye, inside the Sin City Theater at Planet Hollywood.  The following year, she was picked to be the lead vocalist in Holly Madison’s 1923 Bourbon and Burlesque, at Mandalay Bay; after which she became the Emcee at the Chippendales-produced 53X at Paris Las Vegas, in 2016.  The soulful singer really set tongues a-waggin’ with her appearance in a pair of music videos for Lil Wayne (“Lollipop” featuring Static, and “Every Girl” featuring Drake), and as the headliner at Rose. Rabbit. Lie., at the Cosmopolitan of Las Vegas.  More recently, she headlined Bourbon & Blues in the Shag Room at Virgin Hotels Las Vegas and the Entertainers Lounge at S Bar at Mandalay Bay.

Bandleader Brian Newman (Lady Gaga: Jazz & Piano) recently told me that he first encountered Skye singing at NoMad Las Vegas and knew on the spot that he needed to invite her to join the merry band of hep cats and hellacious kittens he’d assembled for Brian Newman: After Dark, his roof-raising late-night residency in the NoMad Library.  it was here that I became reacquainted with Miles, witnessing her emotive delivery of “Girl Crush”—the GRAMMY-winning ballad penned by the songwriting trio of Lori McKenna, Liz Rose, and Hillary Lindsey (aka the Love Junkies) that became an RIAA Quintuple Platinum-certified hit for Little Big Town—a performance that left me, in the parlance of today’s youth, shook. *

And while “Girl Crush” is an amazing song, whether performed by Little Big Town or by Harry Styles (who famously included his cover during his first headlining tour, 2017’s Harry Styles: Live on Tour); in Miles’ talented hands the arrangement deftly morphs from country to jazz to soul to rock to gospel, so smoothly, that audience members are almost dizzy when they jump to their feet to applaud the now breathless, emotionally spent, and triumphantly radiant Miles, who began the song in a coquettish whisper and ended with a roar worthy of the late Izora Rhodes-Armstead. **

Beyond her incredible charisma, captivating stage presence, and 1000-megawatt smile, Miles has two incredible gifts as an entertainer.  There is her voice which doesn’t just run from contralto to mezzo-soprano but contains a forceful power that is heard across her range from the lowest note to the highest.  Then, there is her sophistication as an arranger, which cannot be overstated.  She builds layers upon layers of songs into each number, arranged to suit her mood, mode, and range.  She might start with a base of classic jazz and blues standards; but into this, she weaves contemporary hits, rap, rhythm & blues, hard rock, and funk, so seamlessly that it will take you a moment to realize that she’s just rapped a couple lines of Nicki Minaj lyrics into a Muddy Waters song!

The other night at Ghostbar, Miles began with Cab Calloway’s “Minnie the Moocher” then segued into Nirvana’s “Smells Like Teen Spirit,” and rounded it out with Guns N’ Roses’ “Welcome to the Jungle.”  Another number, Buddy Guy’s “Whiskey, Beer & Wine” was interspersed with verses from Snoop Dogg’s “Gin and Juice” and Jamie Foxx’s “Blame It (on the Alcohol).”  There was Sam & Dave’s “Hold On, I’m Comin’” mixed with Grandmaster Flash and the Furious Five’s “The Message.”  Rihanna’s “Bitch Better Have My Money” was sung, as was Beyoncé’s “Sugar Mama,” and one of Miles’ signature songs, Koko Taylor’s “Voodoo Woman.”

If I had to pick my favorite numbers of the night, though, it would be Miles’ deep dive into Mary J. Blige’s “I’m Going Down” (which absolutely rocked while being riotously hilarious, and left my voice hoarse from cheering), and her soulful take on Harry Styles’ “Watermelon Sugar,” using it as a musical segue between phrases from a quartet of songs by New Edition/Bobby Brown (“Candy Girl,” “Mr. Telephone Man,” “Every Little Step I Take,” and “I Want You Back”).  Finally, just before 2am, the show concluded with the Midnight Skye Dancers, who took us all to church while getting down with their fine selves to a gorgeous rendition of “House of the Rising Sun” by Heavy Young Heathens featuring the Nashville United First Baptist Vocal Assembly.

The grand (re)opening of Ghostbar will be this Wednesday, August 03; while the opening night of Midnight Skye will be on Friday, August 05.  And, if Friday night was any indication, it’s a safe bet that Midnight Skye at Ghostbar is fast going to become a new favorite late-night weekend hang for a lot of in-the-know locals.  I know it’s already one of mine!

P.S.  Am I the only one who thinks that Delta Sky Miles needs to hire Skye Dee Miles to be their spokesperson?

Get into it!
#PALMS

[Editor’s Notes: * At the 2015 Country Music Association Awards (CMAs), “Girl Crush” won the awards for ‘Song of the Year’ and ‘Single of the Year,’ and had been nominated in the category of ‘Music Video of the Year.' Then, at the 2016 GRAMMY Awards, the song won the awards for ‘Best Country Duo/Group Performance’ and ‘Best Country Song,’ while also having been nominated for ‘Song of the Year’ // ** Izora Rhodes-Armstead and Martha Wash performed under the name Two Tons of Fun, as the backup singers for Sylvester; and later, as The Weather Girls, found international success with the now anthemic dance classic “It’s Raining Men”]