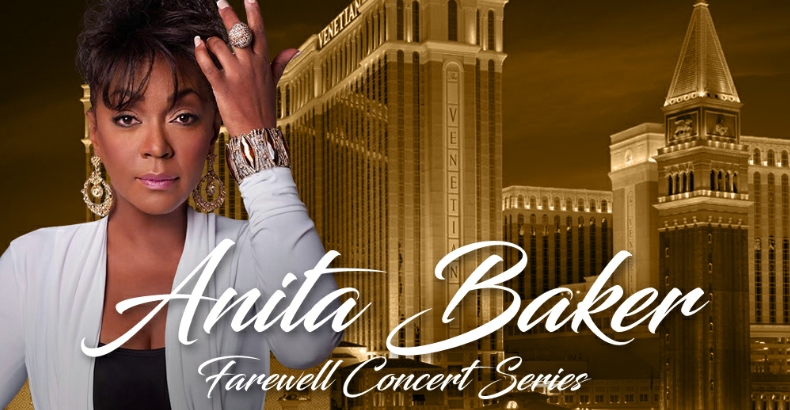 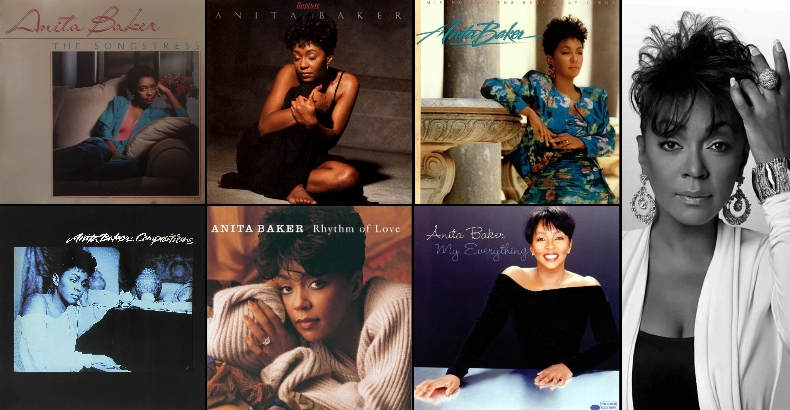 [Anita Baker] embraces you with her voice, a lustrously textured contralto that she uses like an instrument, carefully shaping the contours of each note to produce a sculptured sound.  She then bends these melodic fragments into fresh forms with absolute control and amazing fluidity.  And she devotes just as much time to a song’s lyrics, investing them with a mesmerizing intensity.
-Phyl Garland, “Anita Baker’s Love Songs,” Stereo Review 55 (December 1990)

The sultry and spectacular Anita Baker is coming to Las Vegas, this summer, with a five show mini-residency of her incredibly popular Farewell Concert Series, presented by Live Nation Las Vegas, at the Venetian Theatre inside The Venetian Resort.

Now, Anita Baker had been singing professionally since the late ‘70s when she was invited by Michael J. Powell and Derek Dirckson to be the lead vocalist for their Detroit soul outfit, Chapter 8, and on the band’s first EP, 1979’s self-titled Chapter 8.  While Chapter 8 didn’t record any chart-topping hits, the single “I Just Wanna Be Your Girl” did serve as a showcase for Baker’s right contralto.  Dropped by their label, because of Baker’s perceived lack of “star potential,” Baker moved on from Chapter 8, and released her debut album as a solo artist, on Beverly Glen Records.  1983’s The Songstress landed a couple of singles on the R&B charts; but after ongoing legal disputes over everything from royalties to breach-of-contract, Baker was released from her contract with Beverly Glen, and was signed to Elektra.

I wanted to do it from a consumer standpoint.  When I come home from whatever I'm doing all day, I want to put on an album that's consistent in whatever it is… fireside love songs, with jazz, blues, and gospel overtones.
-Anita Baker describing the thought behind her multi-platinum, Grammy-winning 1986 album, Rapture

With her new contract allowing her creative control, as well as production oversight (Baker has been the executive producer of every album she’s released since), she brought in her former Chapter 8 bandmate, Michael J. Powell, as producer; and the result was 1986’s Rapture, which – on the success of the singles “Sweet Love,” “Caught Up in the Rapture,” and “No One in the World” –  went on to sell more than 8 million copies around the world, earning the album a 5x Platinum certification from the RIAA.  Oh!  Did I forget to mention that Rapture also garnered Baker her first two Grammys?  Because it did.  Baker would go home from the 29th Annual Grammy Awards with a pair of gilded gramophones; “Best Female R&B Performance Vocal” (Rapture) for her singing, and “Best R&B Song” (“Sweet Love”) for her songwriting (shared with Louis A. Johnson and Gary Bias).

Finding themselves in a great groove, Baker would collaborate with Powell on her next two albums, 1988’s Giving You the Best That I Got, and 1990’s more jazz-oriented Compositions.  The former would go on to sell five million copies (receiving a 3x Platinum certification from the RIAA), earn Baker another trio of Grammys, and top the Billboard 200; while the latter was certified Platinum, and brought Baker the fourth of her five Grammys in the category of “Best Female R&B Performance Vocal” (an achievement surpassed only by the late, great Aretha Franklin, mind you, who won this category ten times).

1994 brought Rhythm of Love and with it the singles “Body & Soul” (a Top 40 hit) and “I Apologize.”  Her fourth consecutive million-selling album, Rhythm of Love was certified Double Platinum, topped Billboard’s R&B chart, and went to number 3 on the Billboard 200; while “I Apologize” yielded Baker her eighth Grammy (her fifth in the category of, you guessed it, “Best Female R&B Performance Vocal”).

I could go on, but it’d really be gilding the Anita Baker lily, and besides being superfluous, ain’t nobody got time for that.  What you do need to know are the following two facts:

So, check your calendar, call a friend (or three), pick a night, and allow yourself to be caught up in the rapture of Anita Baker.  We already know one thing: She’s gonna be giving us the best that she got, baby.

[Editor’s Note: Because “Giving You the Best that I Got” (single) was released in September, but Giving You the Best that I Got (album) didn’t drop until October, the song was eligible to win both “Best Female R&B Performance Vocal” and “Best R&B Song” (in addition to being nominated for both “Song of the Year” and “Record of the Year”) at the 31st Annual Grammy Awards; while the album wasn’t eligible until the next year, when it won Baker yet another “Best Female R&B Performance Vocal” Grammy.  This means that a song and an album of the same name (by the same artist) won the same award, two years running.  Werq, Ms. Baker!]