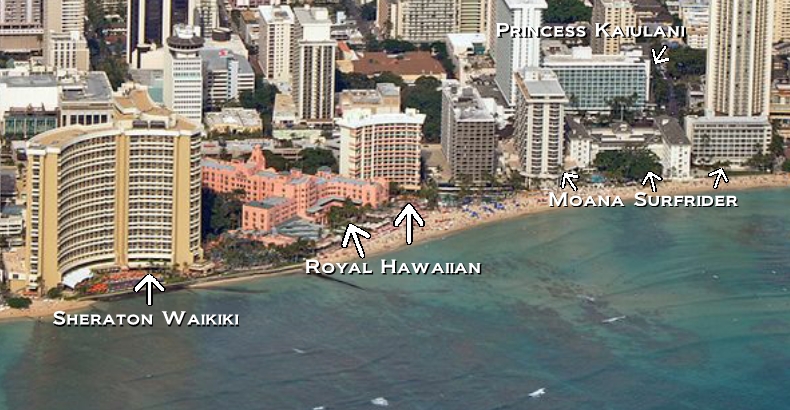 Starting with my parents’ honeymoon in the mid-Sixties, whenever my family has vacationed on the Hawaiian island of O’ahu (with two exceptions) we’ve stayed at The Royal Hawaiian Hotel. * This year, however, when looking for a place to move-in for a few months (to wait out the time before getting vaccinated), I suggested staying a couple of doors down, at the Moana Surfrider, A Westin Resort & Spa.

And while I’ll be discussing the Moana Surfrider in a future article (and its Penthouse in yet another); its history and the history of its three sister properties in Waikiki—the Sheraton Waikiki, the Royal Hawaiian, and the Princess Kaiulani hotels—needs to be told, first.

By the late 1950s, the Moana (opened in 1901) and the Royal Hawaiian (opened in 1927)—along with the SurfRider (opened in 1951) and the Princess Kaiulani Hotel (opened in 1953)—were all owned by Matson Line which, prior to the advent of air travel between Hawaii and the Mainland, sailed the “white ships of Matson” to Honolulu from the ports of Los Angeles and San Francisco. **

Then, in 1959, Matson sold its Waikiki hotels to Sheraton Hotels and Resorts, making these properties Sheraton’s first outside of North America.  And then things really got interesting.  The Japanese industrialist brothers Kenji Osano and Masakuni Osano formed the Kyo-Ya Company, Ltd, and in 1963 purchased the Moana and the SurfRider (next door, to the east), while Sheraton stayed on board to manage the operations of both hotels.  As the decade drew to a close, the Osano brothers converted the SurfRider into a wing at the Moana and—obviously taken with the name—opened the 23-story Surfrider Hotel (next door, to the west).

Now, with the exception of the Outrigger Hotel (located betwixt the Royal Hawaiian and the Surfrider hotels), all of the beachfront properties in the heart of Waikiki were owned by the Osano brothers and operated by Sheraton Hotels and Resorts.  Putting it into Las Vegas terms, it was akin to the late ‘90s, when Mirage Resorts owned (north to south) Treasure Island, The Mirage, Bellagio, half of the Monte Carlo, and the Boardwalk Hotel & Casino (if the Strip and everything east of it were ocean).  The properties proved to be so valuable, in fact, that owning them landed the Osano brothers on Forbes’ 1999 list of the World’s Richest People.

Fast forward to 2007, and Starwood decided to rebrand the Sheraton Moana Surfrider as the Moana Surfrider, a Westin Resort & Spa; with the original Moana (1901) now the Historic Banyan Wing, the one-time SurfRider Hotel (1952) now the Diamond Wing, and the former Surfrider Hotel (1969) as the Tower Wing.  Meanwhile, as virtually anyone who’s stayed in a hotel in the past few years is aware, Starwood has since merged with Marriott.  Now, the Osano brother’s properties—managed under the Marriott banner, one and all—are branded as follows: The Royal Hawaiian, A Luxury Collection Resort; the Moana Surfrider, A Westin Resort & Spa; the Sheraton Waikiki Hotel; and the Sheraton Princess Kaiulani Hotel.

[Editor’s Notes:  * Once, in the early aughts, my mom and I spent a couple weeks at the then-newly opened Ali’i Tower at the Hilton Hawaiian Village.  More recently, my dad and stepmom stayed at the Ritz-Carlton, Waikiki Beach.  Both were one-offs.  // ** Originally built in 1897 as ʻĀinahau—the royal estate of Princess Victoria Kawēkiu Kaʻiulani Lunalilo Kalaninuiahilapalapa Cleghorn, the last heir apparent to the throne of the Kingdom of Hawai’i—the house burned down in 1921, and Matson Lines built the Moana Hotel’s Bungalows there, in the 1930s.  The Bungalows, in turn, were demolished in 1953, to make way for the Princess Kaiulani Hotel, which at 11-stories was the tallest building in Hawaii, at that time. // *** According to my mom, in the late-‘60s there was this little shack on the beach, where the Sheraton now stands, that made the world’s best hamburgers.]