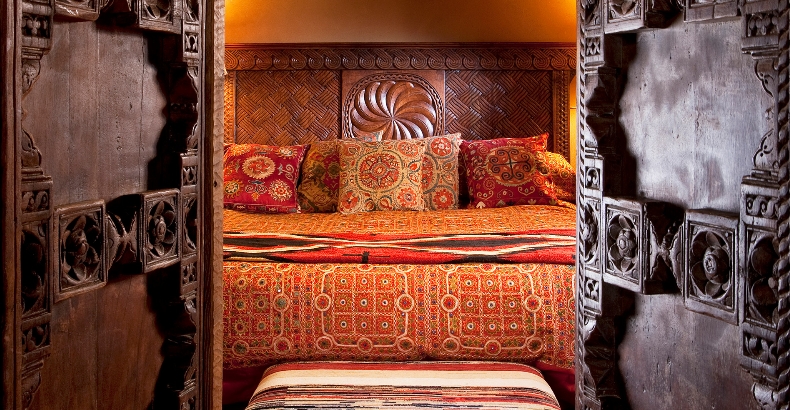 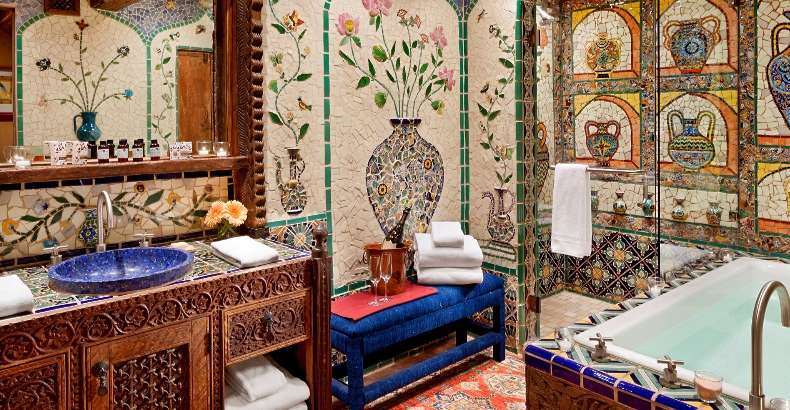 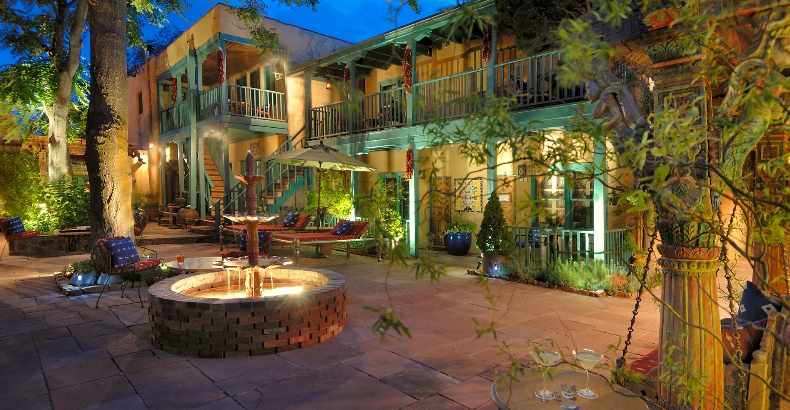 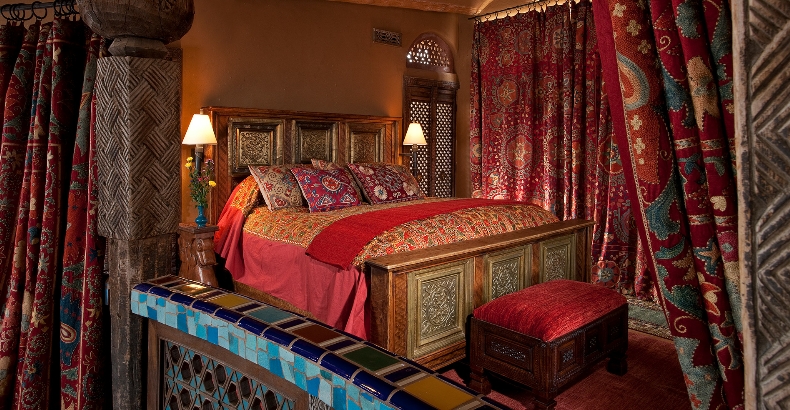 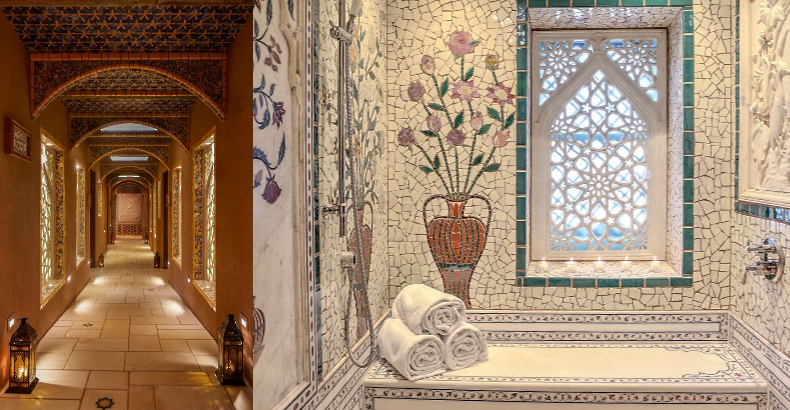 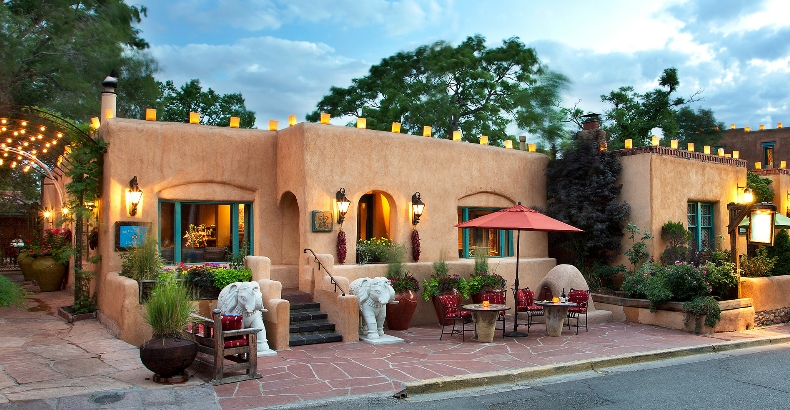 “In a world where cultural heritage is endangered, we have made it our life’s work to support artisans overseas while incorporating the handcrafted art of the Silk Road in furnishings and interior design.”  This, according to Sylvia Seret, the artist who, with designer husband Ira, created Santa Fe's romantic Inn of the Five Graces.

Frankly, it shouldn’t work.  A centuries-old adobe and river rock compound, in the heart of historic downtown Santa Fe, surrounding hidden courtyards, where every interior detail seems to have sprung from the tales of Scheherazade.  (It’s okay: Go and read that, again.)  And yet, at the Inn of the Five Graces, this seemingly incongruous fusion of East and West has resulted in that rare luxury lodging that creates a transcendent escape while being enmeshed into the narrative of its surroundings.

And just when you think your brain can’t really fathom all of the visual and tactile stimuli (some of Sylvia’s favorites include the antique carved marble screens from India, some of which date to the 17th century; the hand-painted antique Tibetan cabinets; the gorgeous fully hand-embroidered Uzbek curtains, and the phenomenal lapis lazuli mosaic ceiling with inlaid stars that Ira designed, from which hangs a Dale Chihuly chandelier); then you meet the Serets, the artists/designers who opened the hotel in the mid-nineties; and the story just makes sense.

A protégé of legendary Vogue editor Diana Vreeland, Ira had introduced the Western world to Afghani sheepskin coats through a collaboration with Anne Klein, before meeting Sylvia who was then designing hand-stitched velvet coats.  Fast-forward thirty years, and after establishing Seret & Sons – the globally renowned purveyor of Silk Road splendors, most notably hand-carved furnishings exactingly-upholstered with the tapestry-woven kilims found in the countries of the former Persian Empire (Ira’s “medium” if you will, one that’s often been imitated, though never quite duplicated) – Sylvia and Ira have, with their son, Sharif, opened Inn of the Five Graces; where everything just begs to be touched, seen, or (in the case of breakfast in the courtyard as well as the cookies at turndown) tasted.

Says Ira, “I'm proud that ours is a family-owned hotel (which is becoming rarer these days); and while Sylvia and I are the artists and designers who conceived the hotel to showcase our combined artistry, it’s our youngest son, Sharif, who developed and fashioned the property into the world-class, award-winning, luxury hotel it's become.”

The closest you’re ever going to get to sleep inside of Jeanie’s bottle (or Ali Baba’s cave, for that matter) – only with the most wonderful concierge I’ve encountered in the past decade, and a genuinely attentive staff – Inn of the Five offers guests the unique opportunity to luxuriate in color-saturated surroundings that champion multiculturalism while showcasing the incredible furnishings created by and for Seret & Sons (a mere five minute walk away).  Words like “enchanting” and “magical” have become rhetorically hyperbolic, but even they can’t quite do justice to Santa Fe’s Inn of the Five Graces.

[Editor’s Note: A different version of this article was published in Celebrated Living, May/June 2019 (ink Global)] 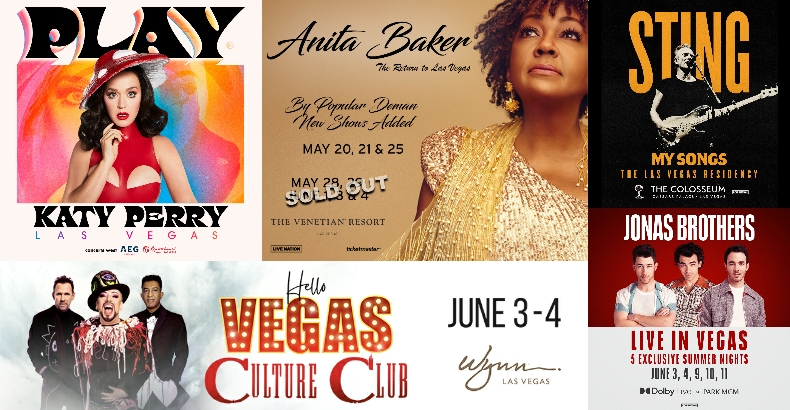