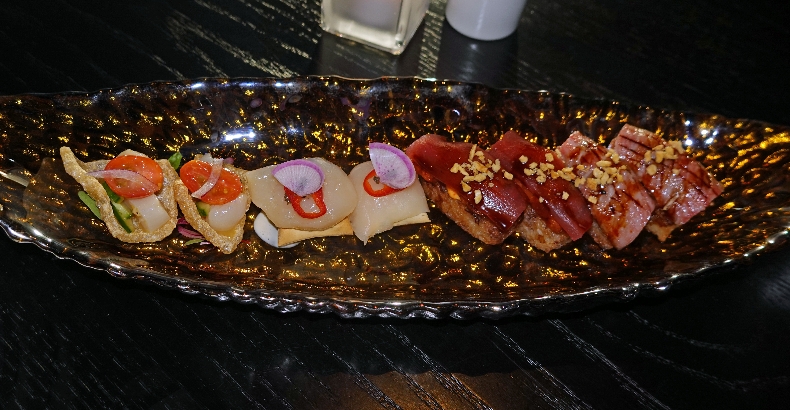 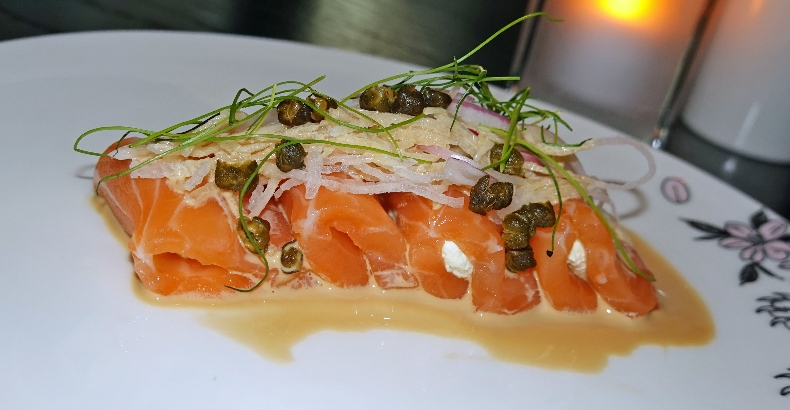 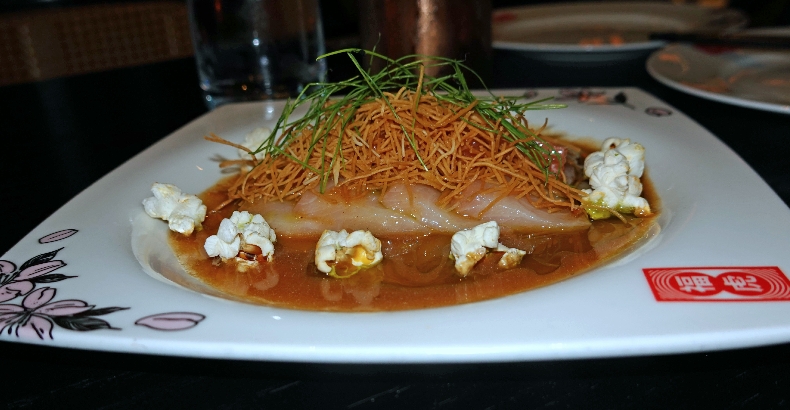 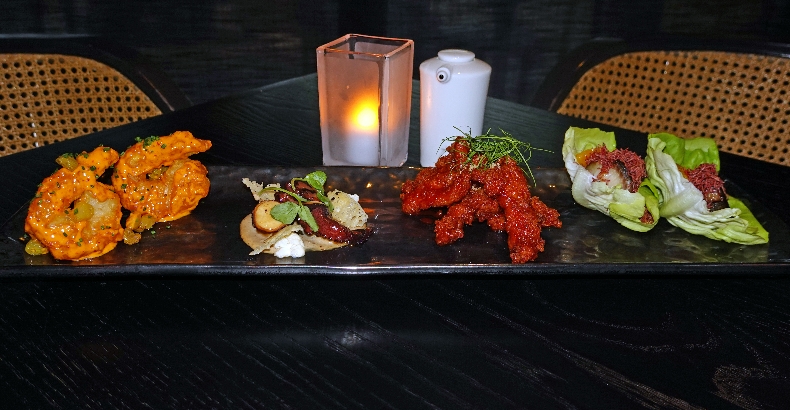 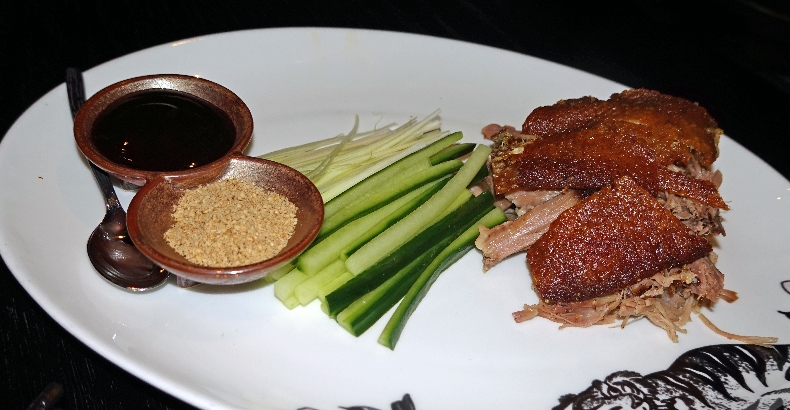 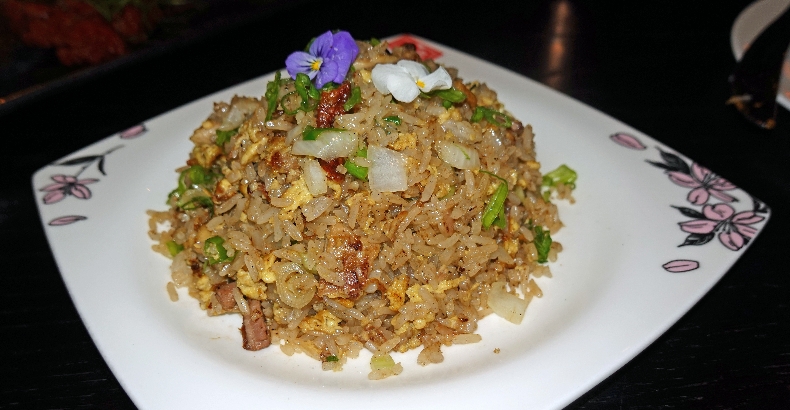 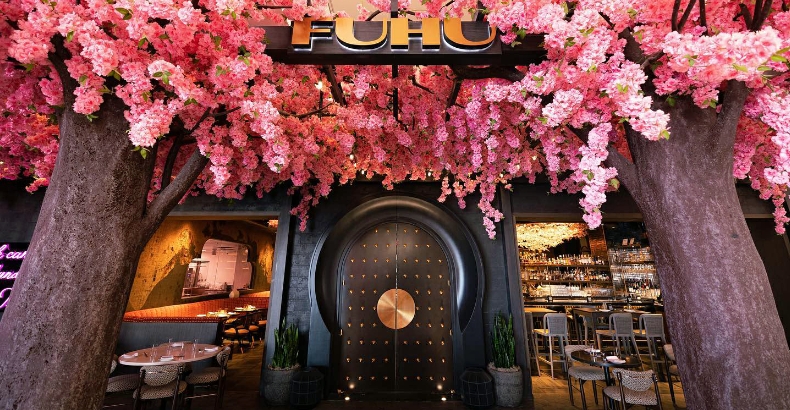 I’ve been enjoying Chef Joseph Elevado’s food, here, in Las Vegas, for nearly a quarter of a century, going back to 1999 when he was chosen by Nobu Matsuhisa to open the celebrity chef’s first Nobu in Las Vegas, at Hard Rock Hotel & Casino, where, by 2001 he’d assumed the role of executive chef.  After Nobu, he oversaw the culinary offerings at Social House (at Treasure Island and then at The Shops at Crystals); and then, at Andrea’s at Wynn Las Vegas, where the expression “vibe dining” was first coined to describe am environment in which the dining and nightlife experiences were merged into one.

I figured that Las Vegas' latest "vibe dining" hotspot, Zouk Group's FUHU—the name comes from the Chinese words “fú hǔ” (伏虎), which translated means “to subdue a tiger” (and idiomatically refers to overcoming sinister forces)—would be a great place to have a delicious dinner before seeing Journey perform with a symphony orchestra, in the Resorts World Theatre.  Needless to say, my faith in Chef Elevado was well-placed because otherwise, I wouldn’t be telling you about it.  So, let’s get down to brass tacks, shall we?

Our meal began with a quartet of selections from the “Raw” section of the menu, that included the Coconut Tuna Ceviche (with celery, Bermuda onion, cilantro, coconut, and chicharron), the Hokkaido Scallop Bantal (with ponzu aioli, truffle, and a pillow cracker), the Crispy Tuna (with rice crisp, spicy mayo, sweet soy, and crispy garlic) and the Crispy Oh Toro (same as the Crispy Tuna but using the fatty belly meat of the Bluefin Tuna).  Nine times out of ten the Crispy Oh Toro would have been my favorite [Don’t get it twisted: That toro was fan-friggin-tastic!]; but I was so blown away by the Hokkaido Scallop Bantal [bantal is the Malay word for “pillow,” btw…], that I was thrown for a loop.  Usually, I’m not one for scallops; but this was next level!  First, the scallop wasn’t as mushy as I always seem to find them to be, and second, my mouth was taken on a journey that began with the scallop, swerved into the creaminess of the ponzu aioli, and finished with the crunchiness of the rice crispy and crispy garlic.

Next up were another pair of “Raw” dishes, the Yellowtail Sashimi (with grapefruit, serrano, popcorn, kataifi, and yuzu emulsion) and the “Smoked” Salmon Sashimi (with wasabi crème fraîche, crispy capers, and lemon soy).  From an entertainment standpoint, it’s hard to beat the “Smoked” Salmon Sashimi, which is brought to the table under a glass dome filled with what I imagine is dry ice smoke, which dissipates whence the server lifts and removes the glass dome.  Of course, being a good Jewish boy, I’m gonna be a particularly happy camper whenever smoked salmon is on the menu (with or without quotes).  That said, the Yellowtail Sashimi was a multisensory sensation, with the flavor from the serrano chilis balanced by the sweet/tart flesh of the grapefruit and the yuzu emulsion, while the popcorn [Yes, popcorn, in a sushi dish!  Who’d’ve thunk it?] and the fried kataifi [that skinny noodlelike pastry often used in Middle Eastern and Mediterranean desserts] added a tactile crunchiness that I wasn’t expecting.

We enjoyed another quartet of starters, this time from the “Tiger Bites” section of the menu, including the Tiger Shrimp (with flash-fried shrimp, garlic mayo, and yuzu raisins), the Octopus (with pickled cauliflower, black garlic aioli, and tamarind chili), the FUHU Fried Chicken (with chili glaze and scallions), and the Miso Cod “Taco” (with bibb lettuce, crispies, and orange).  The Tiger Shrimp was a clever take on Nobu’s Rock Shrimp Tempura with Creamy Spicy Sauce, only instead of little rock shrimp these were enormous tiger shrimp, and they were fantastic. The FUHU Fried Chicken was wonderfully zesty; while, as someone who enjoys any dish that allows one to forego utensils, I thoroughly enjoyed the Miso Cod “Tacos” and appreciated the crunch that once again elevated the game.

Our entrée came, in the form of the FUHU Aromatic Crispy Duck (with cucumber, leeks, hoisin sauce, sesame, and pancakes), and a heaping portion of the Duck Fried Rice (with egg and cipollini onion) topped with edible flowers.  As Chef Elevado explained to me, the FUHU Aromatic Crispy Duck is based on one of the most popular dishes at the FUHU at Resorts World Genting in Malaysia (aka the mothership); one that he tweaked for the Las Vegas market.  Thus, the steamed Chinese buns known as mantous (think: Bao buns sans filling) have been replaced by pancakes, the beetroot has been swapped for cucumbers, and the duck (instead of being served whole) is presented as a heaping mound of pulled meat, piled high and topped with large pieces of crispy skin.

Thanks to Chef Elevado, to our server, Marco (who was terrific), and to everyone at FUHU; not just for a great meal that I am looking forward to repeating, but also for getting us in and out with enough time to make it to the show (which rocked)!  Bonus: The doggie bag containing the remnants of our FUHU Aromatic Crispy Duck and Duck Fried Rice made for a particularly tasty late-night snack!