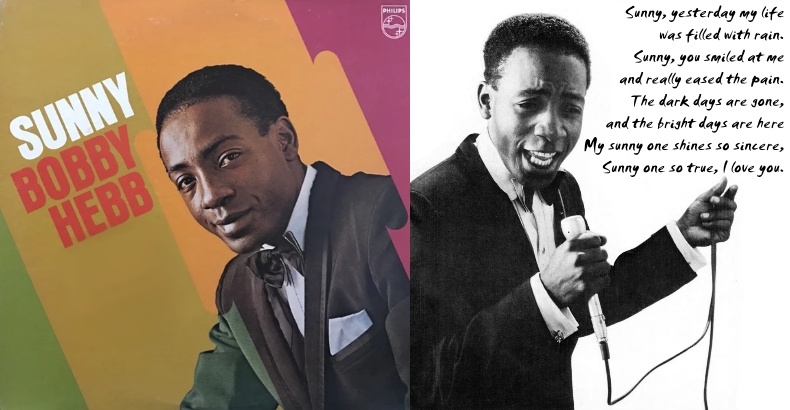 Recently, I had the television on, and, hearing an unrecognized (to me) disco/house version of Bobby Hebb’s 1966 soul opus, “Sunny,” looked up to find that it was playing in a Peloton commercial.  Being a longtime fan of the song, I held up my phone so I could Shazam it and found that it had been recorded by L’Tric & Chloe Wilson.  Having never heard of either, I Googled ‘em, and found that the two Australian artists had teamed up for what was described in a press release as “a sprightly revival of Boney M.’s 1976 disco hit of the same name.”  And while I’ve been a huge Boney M. fan for many decades, the song (one of their biggest hits) was itself, a cover of Hebb’s classic.

I recalled having read somewhere that “Sunny” was one of the most covered songs in the history of recorded music, and (wondering if this were still the case) decided to explore, further.  Turns out that, in 1990, when BMI compiled a list of the most performed songs from its catalogue, “Sunny” was ranked at #18.  A decade later, when BMI published “BMI’s Top 100 Songs of the Century,” “Sunny” ranked among the Top 25 (where it remains, to this day).

This decidedly cheery song about a girl with an analgesic smile was actually inspired by the back-to-back tragedies of President John F. Kennedy’s assassination, in Dallas, on 22 November 1963, and the fatal stabbing of Hebb’s brother, Harold, in Nashville, the following day.  Said Hebb, “…because times were at a low tide, I needed to pick myself up, and ‘Sunny’ became that pick-me-up.  It was, and is, an ode to a sunny disposition and a melodic plea for peace.”

In addition to the recent Aussie revamp, I heard in that Peloton commercial, “Sunny” has been used in television commercials for Volkswagen Golf (2017, Hebb), Indeed (2018, Hebb), Visit Israel (2019, Boney M.), the hold-music for New Zealand phone company 2degrees (2019, Boney M.), for a water-based juice drink in Luxembourg (2020, Hebb), and the Canadian radio version of that earlier mentioned Peloton commercial.  Further, the Boney M. version has appeared in such films as Repentance (1987, USSR), CJ7 (2008, China), Sunny Girl (2011, Taiwan), and Sunny (2011, South Korea); as well as in such television series as Titans (Season 1) and The Umbrella Academy (Season 2).

As of 2015, some 1,141 artists (both well-known and otherwise) had recorded covers of “Sunny,” some with the lyrics and some as instrumentals; so, I’ve decided to highlight some of my favorites (with videos) and provide links to the 70 or so that might most amuse or entertain you.  There are the usual cavalcade of crooners (Johnny Mathis, Andy Williams, Shirley Bassey, Robert Goulet, Frank Sinatra), the jazz singers (Della Reese, Blossom Dearie, Anita O’Day, Nancy Wilson, Ella Fitzgerald), the soul singers (the Four Tops, Stevie Wonder, James Brown, Marvin Gaye, Melba Moore), and some decidedly out-there entries (Robert Mitchum, Leonard Nimoy, Jackie “Moms” Mabley, Les Coquettes), recent recordings (Luis Miguel, Jamiroquai, Bryan Adams, Billie Eilish) and even some recordings by those for whom I’ve decided not to provide links (Anita Bryant, Bill Cosby).

So, come back for Part 2, where I share my favorite versions of “Sunny,” categorized for your listening and viewing pleasure.  Enjoy!

Get into it!
#Sunny