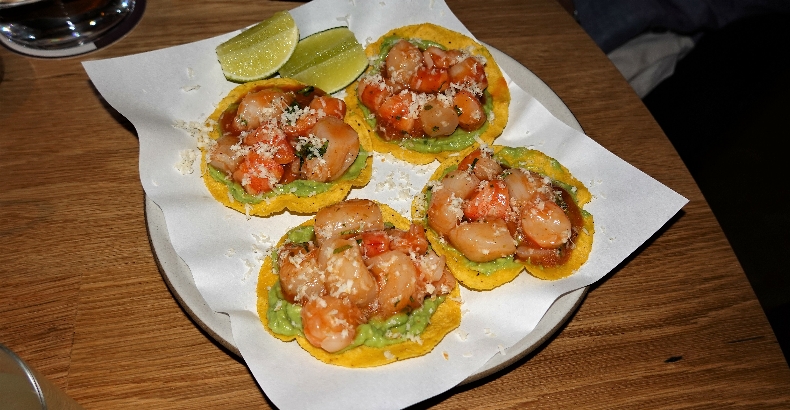 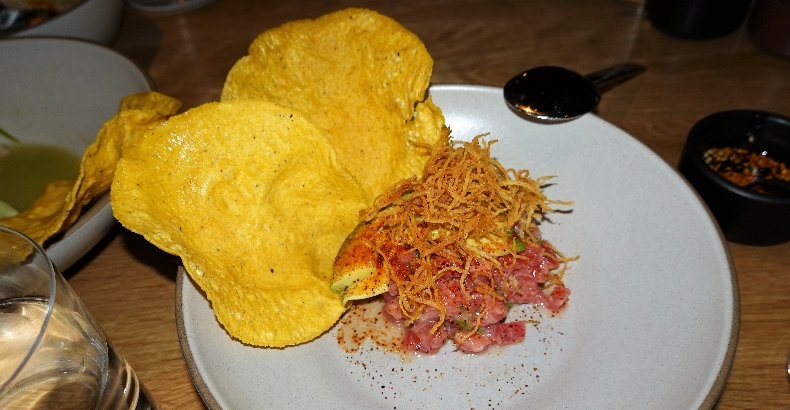 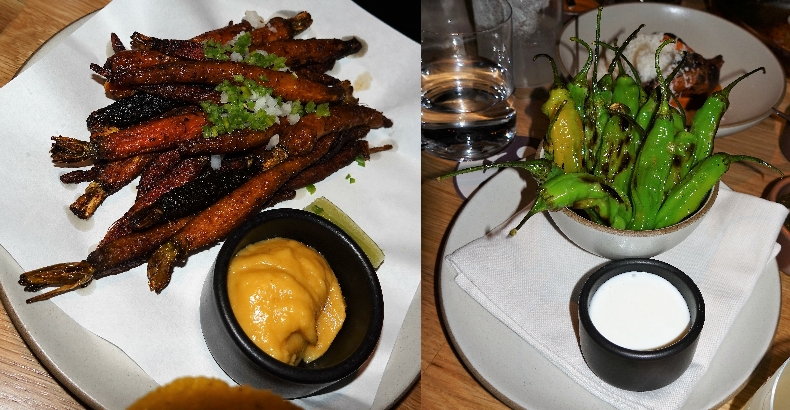 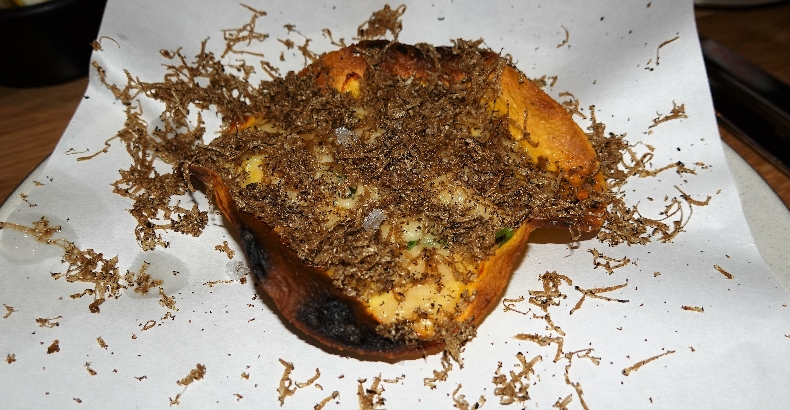 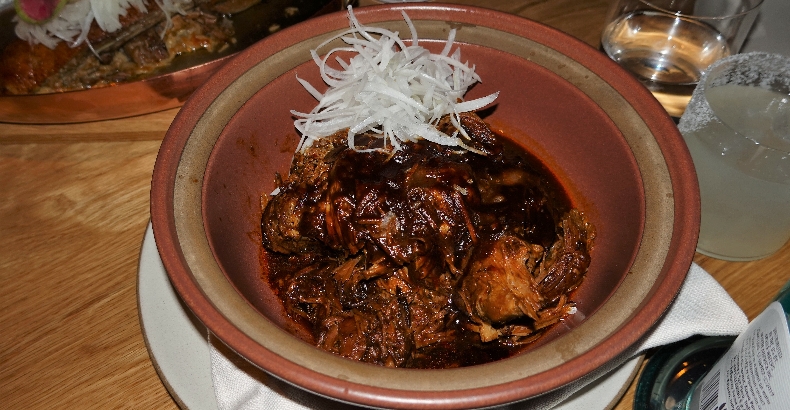 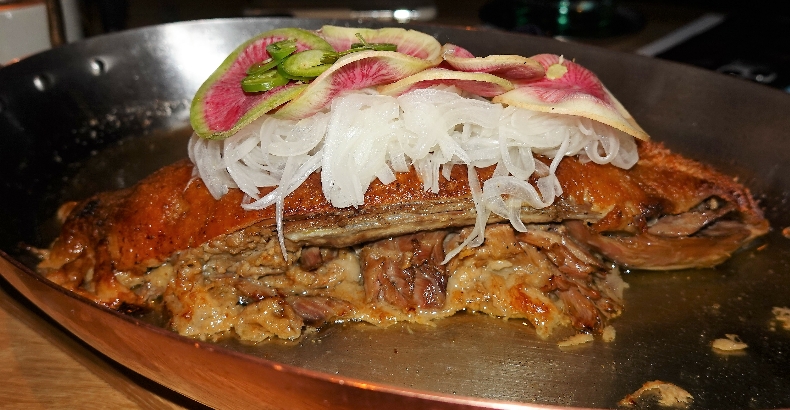 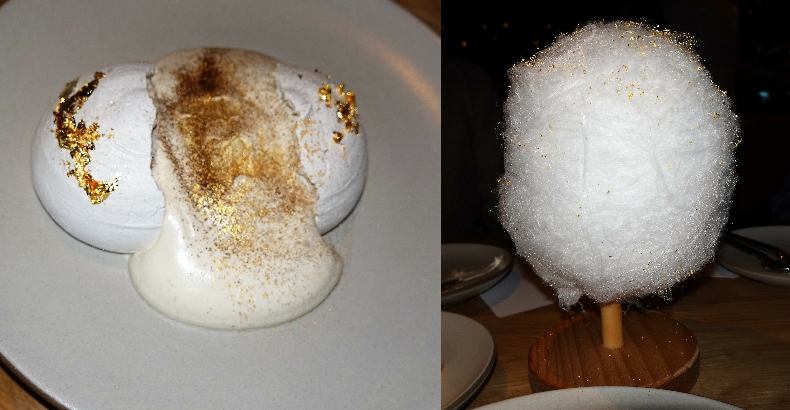 I’m not sure what, exactly, I was expecting from Elio, the new upscale contemporary Mexican restaurant from the team behind New York’s celebrated Cosme and ATLA—chefs Enrique Olvera (whose Pujol in Mexico City has won far too many accolades for its Mexican haute cuisine to list herein) and Daniela Soto-Innes (Olvera’s one-time protegee and now business partner, who’s helmed Cosme and ATLA since their respective openings, and was named World’s Best Female Chef in 2019*), and restaurateur Santiago Perez—that opened this summer.  Would it be a temple to epicureanism à la Pujol?  Would it feature some of that too-cool-for-school vibe that Cosme has (rightly) earned?

Well, after having supped there, recently—on Rosh Hashanah, no less—I’m pleased to report that while it leans far more toward Cosme than it does Pujol, under chef de cuisine Sarah Thompson, Elio is something special and unique unto itself; though it certainly shares the others' worshipful approach to contemporary Mexican cuisine.

Over a leisurely meal that was at once inventive and pared-back, I tasted things I never thought I’d enjoy, and delighted in every tasty morsel.  And while I’d love to go into detail about every single dish, a few really made their mark on me, and already have me plotting my return.

As I was perusing the menu while sitting in Elio’s lounge—which is pretty fantastic in and of itself and is a swanky place to enjoy a Casa Dragones Paloma—my hostess told me to put the menu away, as the chef would be sending out a specially curated selection of dishes for our dining pleasure.  “Of course,” she added, “you’ll have the carrots.  Everyone loves the carrots!”  Mmhmm, I thought.  Carrots?  We’ll see...  So, the meal progressed, and the Carrots al Pastor (with pineapple and serrano chile) was brought to the table.  I was passing the plate to my friend, John, and, almost as an afterthought, I reached down and grabbed one with my fingers.  Now, I’m not a veggies guy in the best of times, but this was something different.  Something unexpected.  It was sweet, but not too sweet, and not too carrot-y.  Going with it, I grabbed another; this time dipping it in the accompanying pineapple butter.  Before I knew it, I was enthusiastically chomping on these carrots like a Jewish Bugs Bunny.  Wanting to know more, I inquired about the carrots with Chef Thompson, who informed me that Elio uses baby carrots, that are “steamed, rubbed in our al pastor marinade, dehydrated, and fried to order.”  Carrots.  Who knew?

A particularly cheerful dish, the Shrimp Tostada (with guacamole and horseradish) was bright and colorful, and the contrast of textures between the meaty Black Tiger Shrimp, the simple yet perfect guacamole (avocado mixed with lime, serrano chile, white onion, and salt), and the crispy corn chip was fantastic.

The Truffle Tostada (with New York cheddar and corn cream) has already become something of a signature dish for Elio, and with good reason.  Fun, decadent, delicious, and topped with so much shaved Umbrian black summer truffles that they appear hirsute in dim lighting, these are not to be missed by anyone, let alone any fan of the flavorful fungus.  Chef Thompson’s favorite aspect of this dish is that between the tostada and the sweet corn purée, guests can “experience the Mexican corn from Oaxaca, as well as the sweet yellow corn, found here, in the US.”

Like most of the dishes at Elio, the Lamb Barbacoa (with caldo and carrots) is intended to be the main ingredient in a taco, you make yourself, at the table.  Tender meat from the leg of a Pure Bred lamb** is cooked for 10 hours and topped with a sauce made from a reduction of its own juices.  Whether you opt to dress your tacos with the flavorful Salsa Verde Tatemada (a classic charred green salsa) or the more piquant Salsa de Árbol***, it’ll be a fiesta for your tastebuds.

I know that the dishes at Elio are meant to be divvied-up family-style, and that’s great.  But I’m here to tell you that the next time I dine at Elio, I’m ordering the Duck Carnitas (with radish salad and cilantro) as my entrée, and I don’t plan to share.  It’s that good.  Rather akin to Mexican Peking Duck, and cooked in duck fat, evaporated and condensed milk, and Mexican Coca-Cola, the Duck Carnitas have achieved a cultlike following at Cosme, and will no doubt foster a similar fandom in Las Vegas.  Just be forewarned: If you’re dining with me at Elio, keep your hands off my Duck Carnitas (because I am not averse to wielding my fork as a weapon).

Now, dessert is a sacrosanct time of any meal for me, and Elio did not disappoint.  Taking as its inspiration the meringue desserts found in Mexican markets that are made from whipped egg whites and sugar, the Golden Husk Meringue is unique, inventive, Instagram-able, and tasty.  Dried corn husk is whisked into the meringue, itself; and the dish is served with corn cream and whipped cream and a lot of edible gold leaf.  Also dusted in edible gold leaf is the Cotton Candy, which is honey-flavored, because—as Chef Thompson tells it— “We’ve been finding a lot of great local honeys and wanted to showcase them on our menu.”  Mission accomplished, Chef!

[Editor’s Notes: * Following on the heels of her James Beard Rising Chef award in 2016, Soto-Innes was named "The World's Best Female Chef" of 2019 by The World's 50 Best Restaurants™// ** A collaboration between farmer Keith Martin and chef Thomas Keller, Pure Bred lambs are raised holistically—at Elysian Fields Farm in Pennsylvania—using the “Safe Alternative method” that puts the animal first, resulting in what Farmer Martin and Chef Keller believe is the “best possible lamb” // *** Salsa de Árbol is made from the Chile de Árbol, a small Mexican chile pepper with a bold, smoky flavor, that measures roughly six times hotter on the Scoville scale than the more well-known Jalapeño pepper]