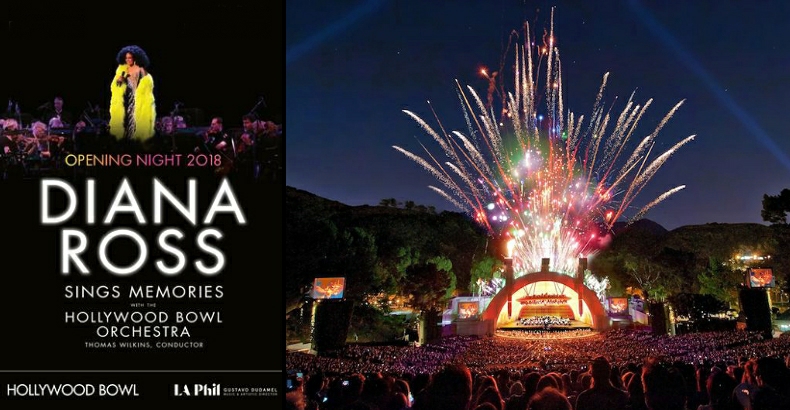 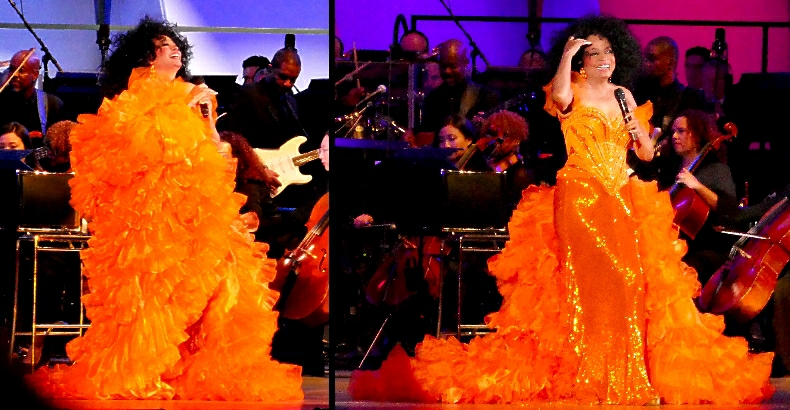 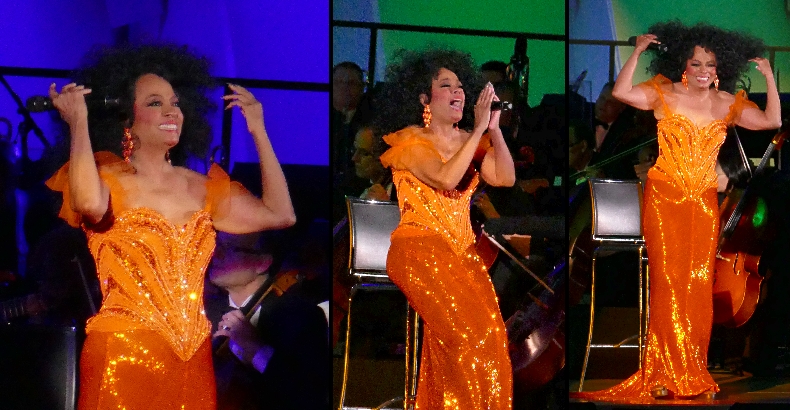 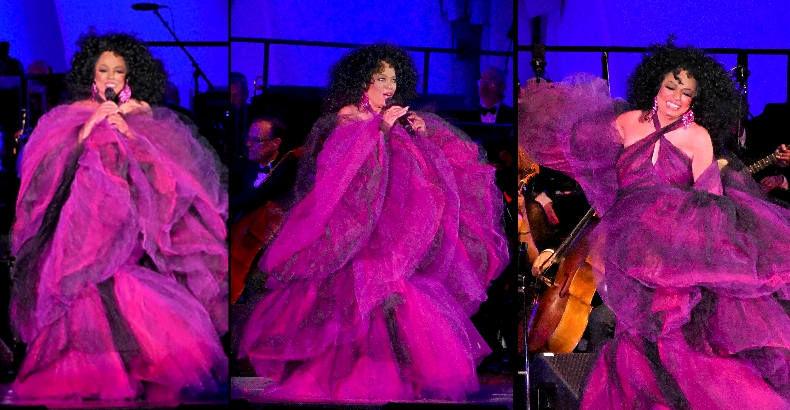 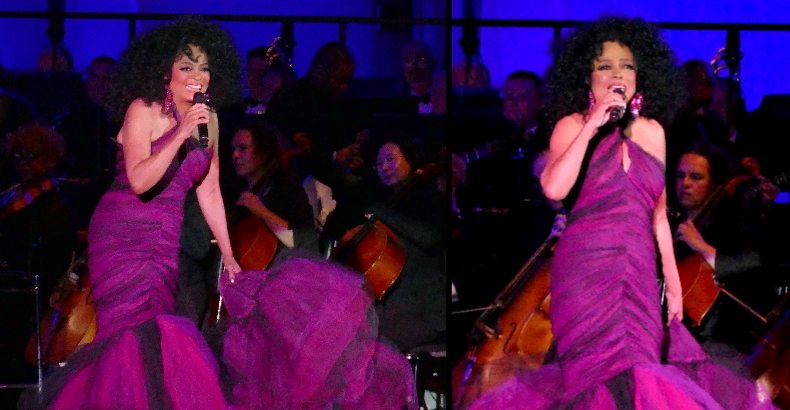 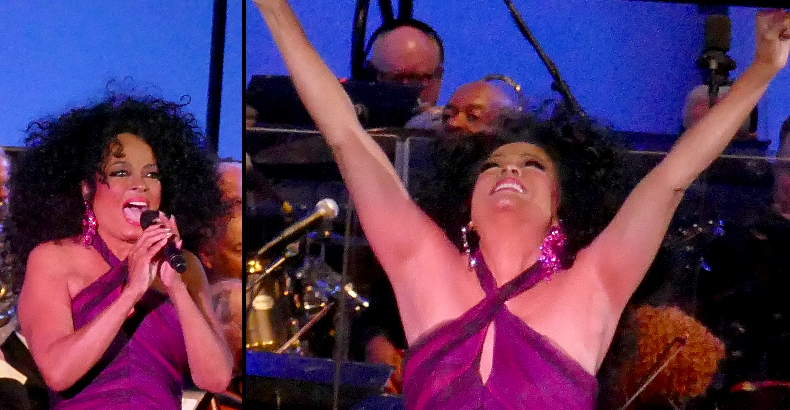 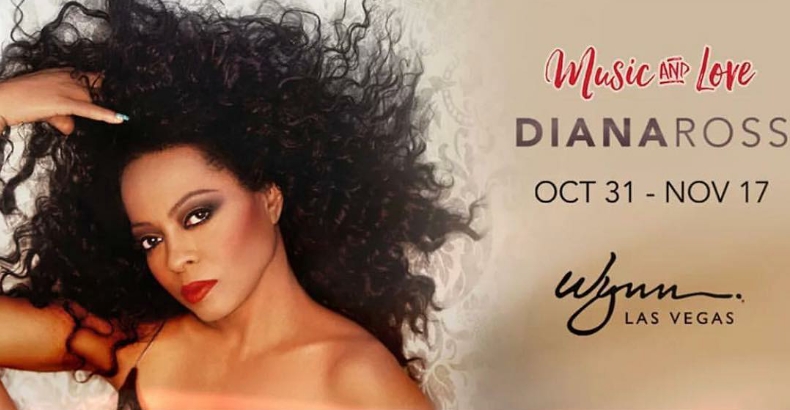 I’d always wondered what it’d be like to see a concert at LA’s famed Hollywood Bowl, and when I was invited to attend this season’s opening night gala – Diana Ross Sings Memories – I was psyched!  And though I assumed that I’d be seeing a more formal version of what I see in Las Vegas; Ms Ross not only proved me wrong, but did so with a gorgeously lush set that made the most of not only conductor Thomas Wilkins and the Hollywood Bowl Orchestra, but also the Fred Martin Choir (part of Martin’s Compton-based Urban Entertainment Institute) that really upped the ante on the scale of the evening’s performance.

And while I – like many of Ms Ross’ fans, that night – would’ve bet good money that she was going to commence the evening with “I’m Coming Out” (it was LA Pride, after all…); I would’ve lost that bet, as she opened with an opulent cover of Lebo M’s “He Lives in You” from The Lion King (1994).

At first I was a bit thrown, but then (after a moment to process), it occurred to me that in the case of her Las Vegas residency, with fans flying-in from all over the globe to see her [as they will when she returns to the Encore Theater at Wynn Las Vegas, with Diana Ross: Music and Love; for nine nights this October and November], there would be riots in the seats, were she not to perform first her hits with The Supremes, followed by her solo Motown hits, then her disco classics, her hits from Hollywood films, and wrap-up with some great covers.  On this night, however – performing for 18,000 people (mostly from Southern California), with that orchestra and that choir, as well as the four enormous crystal chandeliers suspended over the stage – she was able to sing songs that might not be a fit for the audience seeing her, on the Las Vegas Strip; but they sure as heck worked, here!

Don’t get me wrong – she didn’t avoid her hits; she just branched-out and dug deep to find songs that could be arranged orchestrally, and once the audience was able to wrap its collective head around this, everyone got into the mood Diana Ross was featuring.

So, what did she sing?  Well, there was her cover of Spiral Staircase’s “More Today than Yesterday” that’s become a fan favorite at her residency shows; followed by “You Can’t Hurry Love” (the only Supremes’ song that she performed).  Next was “If We Hold on Together,” the theme song from The Land Before Time (1988) – Ross’ biggest hit in Japan, where it hit #1 – before giving us a bit of bubbly fun with “Chain Reaction” (her 1984 single by and with the Bee Gees); and then a bit more melodrama with “It’s My Turn,” Ross’ Top 10 Carol Bayer Sager-penned single that served as the theme song from the 1980 film of the same name.

From 1980’s “It’s My Turn” Ross cleverly segued into 1979’s funktacular “It’s My House,” and the audience went nuts, bobbing along to the Classic House hit written by Ashford & Simpson; before taking their seats once more, for Ross’ 1973 single, “Touch Me in the Morning” (her second #1 on Billboard’s “Hot 100” list as a solo artist, and the 14th of her career).

And it’s a good thing everyone was sitting (including Ross, clad in an orange Bob Mackie gown), because Ross had chosen this moment to take 18,000 folks to church, with a poignant and soulful rendition of the Christian hymn, “Amazing Grace,” which gave even this good Jewish boy a Come-to-Jesus moment that he’s not likely ever to forget.  It was just stunning.

No evening with Diana Ross is complete without at least one song from her Oscar-nominated silver-screen debut, Lady Sings the Blues (1972), and Ross performed two.  First came her take on Billie Holiday’s bluesy cover of Fanny Brice’s song “My Man” (itself a translation of Mistinguett’s “Mon Homme” from the 1920 review Paris qui Jazz, later famously covered by Edith Piaf), and it was a perfect fit with the orchestra; as was the song that followed, the Gershwins’ jazz standard, “The Man I Love.”

In the case of The Wiz (1978), instead of singing “Ease on Down the Road,” as she would at one of her residency shows, Ross performed “Home,” with tears welling in her eyes (and ours); before delivering another disco intermezzo in the form of her 1980 hit, “Upside Down” (written and produced for her by Chic’s Nile Rodgers and Bernard Edwards).

Michael Masser (who co-wrote “Touch Me In the Morning”) and Gerald Goffen’s 1973 song “Do You Know Where You’re Going To,” was originally recorded by Thelma Houston in 1973; but once it was repurposed for the film Mahogany (1975), and was reborn as “Theme from Mahogany (Do You Know Where You’re Going To),” it became another #1 ballad for Ross, who performed it magically, at the Bowl; before closing with “Ain’t No Mountain High Enough,” – Marvin Gaye and Tammi Terrell’s 1967 hit, by Ashford & Simpson – that, when covered by Ross in 1970, became not only her first #1 single as a solo artist, but earned the performer her first Grammy-nomination as a solo artist, as well (in the category of “Best Female Pop Vocal Performance”).

As the evening's finale, as a fireworks lit up the sky (for what seem seemed like a half-hour), Ross returned to the stage, for her encore, with “Reach Out and Touch (Somebody’s Hand),” the 1970 Ashford & Simpson song that was Ross’ debut single as a solo artist.

Does this mean I’m done seeing Diana Ross in Las Vegas?  Absolutely not!  Frankly, I’m already working on deciding who I’ll invite to join me, when I go see her in the Encore Theater, this fall.  But it did allow me to witness a performance by an entertainer who I’d assumed I’d seen do everything in her repertoire; and learn that even at the age of 74, the iconic Diana Ross can still amaze and impress.  That she does so in a stunning cavalcade of vibrantly sparkling Bob Mackie finery?  That’s just gravy.

[Editor’s Note: “My Man” was among the songs performed by Diana Ross and the Supremes, at their final concert (January 1970), at The Frontier, in Las Vegas.]