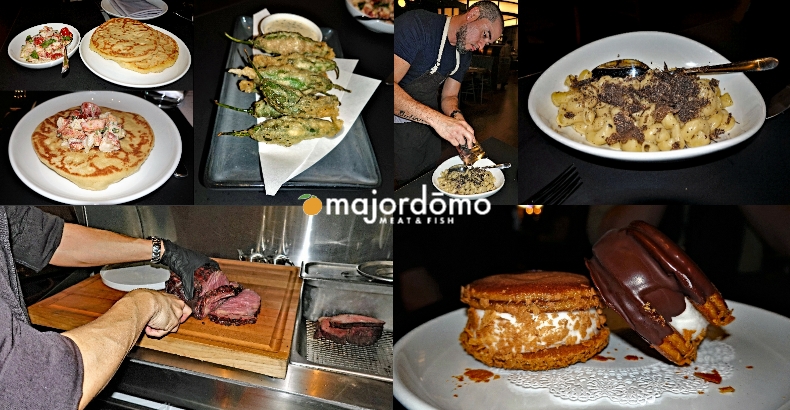 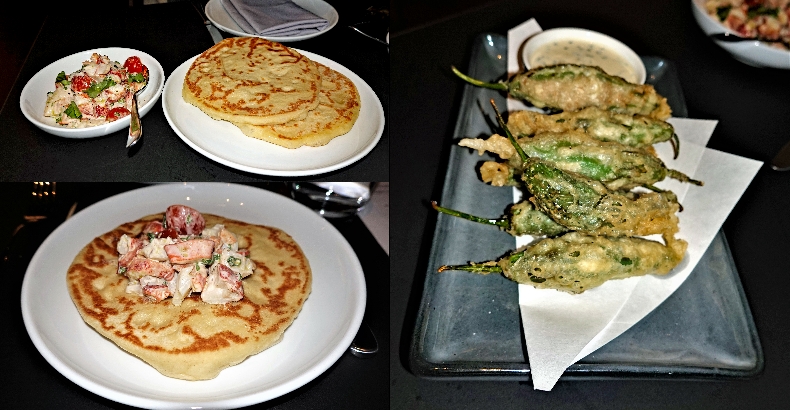 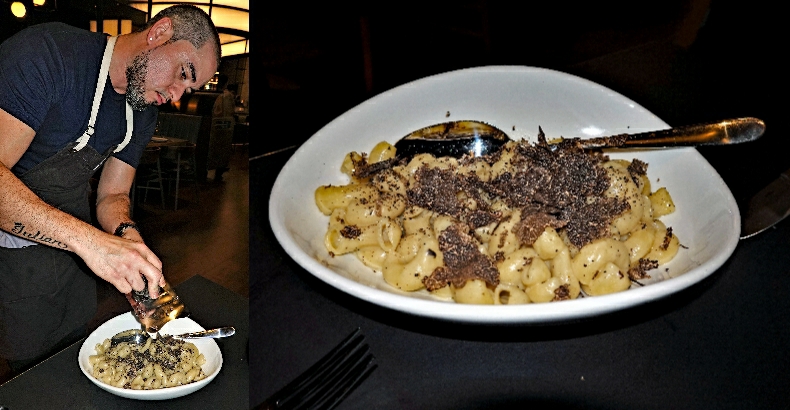 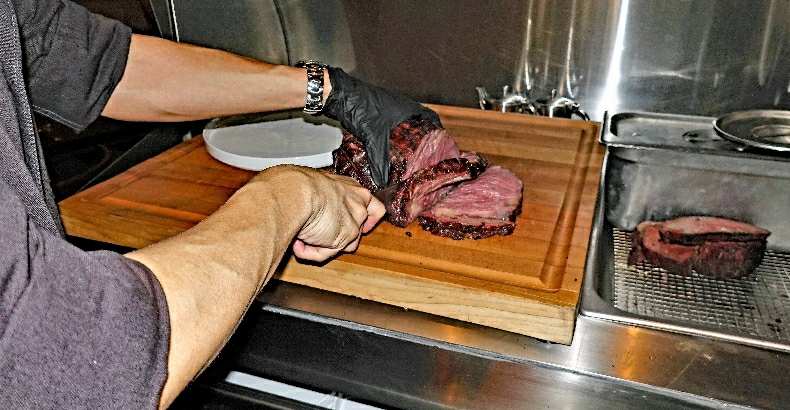 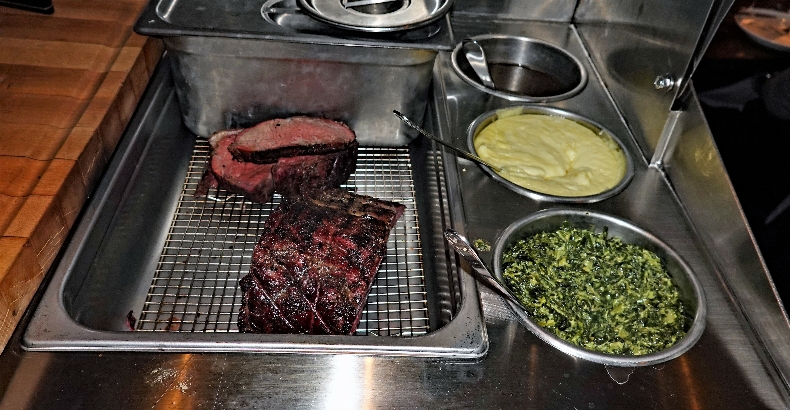 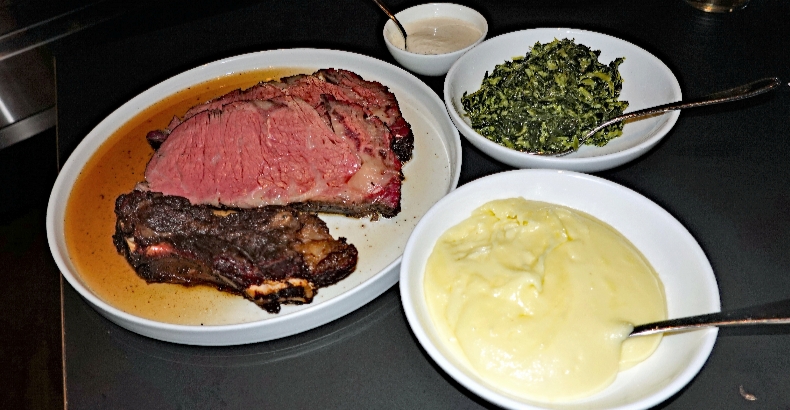 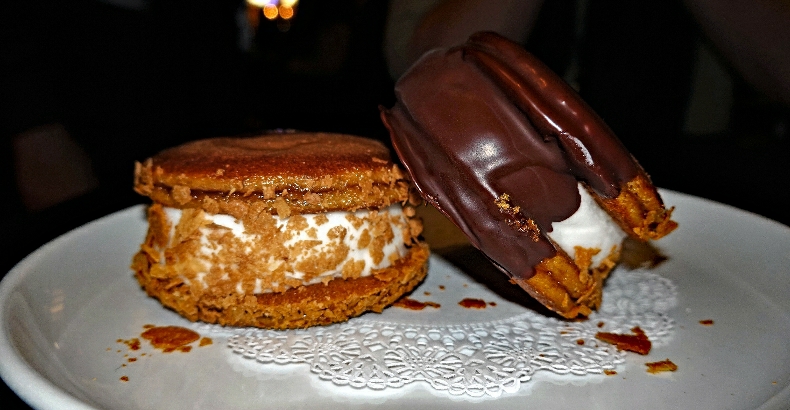 Chef David Chang is one of those chefs who seems to enjoy being defined by his delight in defying preconceived notions.  I’m pretty sure he is happiest when trying (and accomplishing) something that, according to conventional wisdom, cannot (or should not) be done.  That the food-eating public is the beneficiary of these forays into culinary creativity, is the proverbial bucket of gold at the end of Chang’s rainbows, from the Michelin-starred Momofuko Ko, to Momofuku Las Vegas and Milk Bar at The Cosmopolitan of Las Vegas, and now Majordōmo Meat & Fish at The Venetian Resort Las Vegas.

Categorizing Majordōmo as a “steakhouse” is a grave oversimplification.  Rather, the new restaurant (adjacent to Mott 32, off the casino floor of the Venetian’s Palazzo Tower) offers a lively fusion of surf and turf, of Brazillian churrasco grilling and Korean barbeque, of prime rib carts and French dip sandwiches.  There’s a lot going on, but it works.

A recent visit, the other night, found us listening to our server, Holdyn, as she led us through the ins-and-outs of the menu with a fantastic mix of knowledge, wit, and humor.  Also, she did something I love; where, if she didn’t know the answer to something, instead of winging it, she said: “I don’t know the answer to that; but if you’ll give me one second, I’ll go ask someone who does.”  So, we did: And she did.

After putting our respective heads together, we decided on a selection of dishes, and it all began with a thing called a Bing.  Akin to a particularly thick buttermilk pancake, bings come two to an order and with such topping options as Chickpea Dip with Uni, 40-Day Cave-Aged Butter & Kaluga Caviar, Shaved Foie Gras, and Wagyu Beef Tartare.  We opted for surf over turf and went with the Maine Lobster Salad.  And while my friend Marc ate his as though it were a doughy brick-oven pizza (i.e., with a fork and knife); I picked mine up, like a glam New England version of the Taco Bell Chalupa.  So, we asked Holdyn what the deal was, and—looking at both of our modes of eating our respective bings—informed us that while she usually sees people use the bings as tear apart bread upon which they scoop the topping; there is no right or wrong way.  And while I’d always prefer to be right, I guess I don’t mind not being right, so long as I’m not wrong.

While we were eating our bings in our own unique ways, we were also savoring the Stuffed Peppers—tempura-fried Shishito peppers, stuffed with Benton’s Sack Sausage and served with ranch dressing—and this may well be my new favorite finger-food.  It’s very Ozone Park by way of Osaka, and the mix of the flavors and textures is exhilarating.  My advice: Order these.  Do not pass Go.  Do not collect $200.  You’ll thank me (and be praising Chang with every bite).

Just as I was wiping some remnants of ranch dressing from my chin, a server named Chris brought our Macaroni and proceeded to shave razor-thin slivers of black truffle over the bowl until the top was covered with a layer of translucent cocoa-colored truffley goodness.  Meanwhile, this is not truffled macaroni and cheese, mind you, as there is no cheese.  Instead, the “sauce” is prepared with Hozon—a seasoning (trademarked by Chang, and first produced in the Momofuku Culinary Lab, back in 2012) wherein koji fungus and salt are fermented over a layer of chickpeas, in a derivation of the Japanese process for making miso—so, while much lighter than your de rigueur mac and cheese, it’s every bit as rich.

Those visiting Las Vegas are always looking for a show, and the headliners of the show at Majordōmo are smoked and served tableside in customized carts.  We opted for the Smoked Prime Rib.  The Major Double Cut comes with all the trimmings—including jus, creamed spinach, and mashed potatoes—served straight off the cart.  The cut was so generous, in fact, that we were so full after splitting one, that we had to get the other to-go.

And though full, I just knew I couldn’t not get a dessert, for the same reason one doesn’t end a three-act play after the second act.  Mustering our strength, we ordered the Ice Cream Sandwich.  Featuring a heaping scoop of coconut sorbet between a double-pair of molasses pancakes, rolled in feuilleté (a French puff pastry), then half-dipped in chocolate; this was the perfect dessert à deux (as they are served by the pair).  It was light, flavorful, and the crunchy feuilleté was terrific with the molasses pancakes.

So, yes, there’s a lot going on at Majordōmo Meat & Fish, and sure, some of it defies categorization; but if you’re willing to join Chang’s journey in bucking the conventional wisdom, the result is irrefutably tasty.