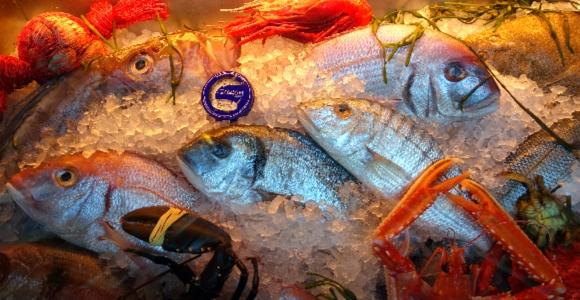 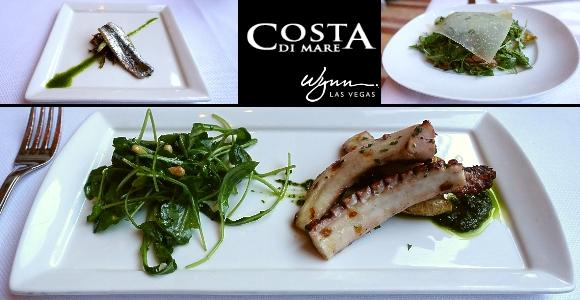 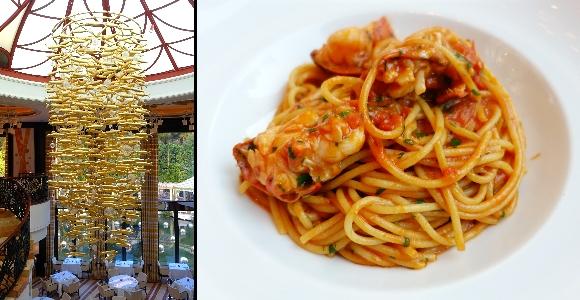 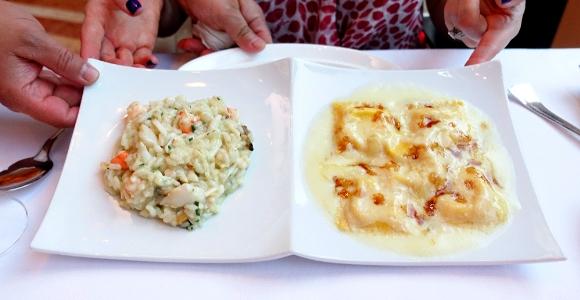 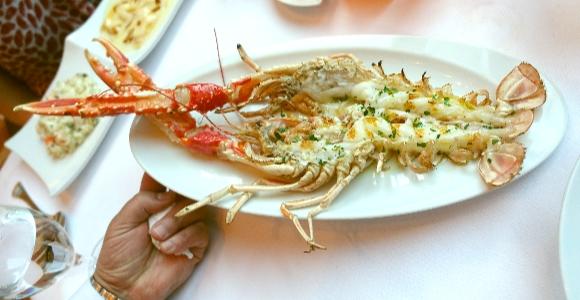 While I love a long, leisurely meal as much (if not more so) than your average bear; sometimes you just want something light and lovely.  Such was the case, not too long ago, when Dawn Hume and I had tickets to see a show, at The Venetian Theatre.  In keeping with the night’s Italian theme, Dawn suggested that we sup at Costa di Mare at Wynn Las Vegas; and then walk over the sky-bridge, to and from The Venetian.  As nobody in town can produce a night as festive as can Mrs. Hume, I immediately gave the idea two thumbs way up.

Helmed by the wonderful chef Marc LoRusso, Costa di Mare retains its former incarnation’s reputation as Las Vegas’ best bet for fresh Mediterranean seafood in a luxurious setting.  The famed seafood cart is still a highlight, filled with the fresh catches that are caught off the coasts of Italy, and then flown-in daily.  And those house-made pastas are enough to make me throw on some slacks and boogie down to the Strip!

And while we could’ve easily turned it into a festival of Italian culinary delights; we kept it light (because you know there’s nothing worse than being wedged into a seat for ninety minutes while digesting a huge meal).

Dawn knew exactly what she wanted, but I opted for something I’d never tried – and we were thrilled all the way around.

After a yummy amuse-bouche (I have no idea what kind of fish it was, but my bouche was sufficiently amused), we gave our orders.  To begin we decided to split an order of Polipo Ligure alla Griglia (grilled Ligurian octopus, crispy potatoes, basil, arugula, and pine nuts).  I’ve been very lucky with octopus, lately; and LoRusso’s didn’t let me down, being prepared just so, without succumbing to chewiness.

Next was the Insalata di Carciofi, Porcini, Ruchetta e Pecorino Sardo (sautéed artichokes, porcini mushrooms, wilted arugula, and Sardinian pecorino).  Despite my usual aversion to all things green and leafy, I’m always game for a dish that comes covered by a huge slice of cheese; and while I’d never had Sardinian pecorino, I’m a huge fan of Sardinian coral jewelry, so I gave it a whirl.  Not only didn’t it kill me, it was pretty tasty!  Yay vegetables!  (Yay cheese!)

Then came our entrées.  Dawn ordered her favorite duo – a side-by-side pairing of the Ravioli di Ricotta con Caciotta (Toscana sheep’s milk ricotta ravioli, Tuscan pecorino cheese, and a Marsala wine glaze), and the Risotto ai Frutti di Mare (risotto, scallops, shrimp, lobster, clams, crab, cuttlefish, and octopus).  And while the bites I tried resulted in a friggin’ symphony of delicate flavors upon my tongue; I was too busy savoring my own entrée to give them the attention they rightfully deserve.

In front of me was a portion of the delectable Spaghetti all’Astice (spaghetti, rock lobster, spicy tomato sauce, and white wine).  I’m not sure how best to describe the manner in which the sweetness of the rock lobster is harmoniously offset by the piquant tomato sauce, other than to say that this dish is definitely in the running to be my favorite pasta.

Meanwhile, with the headline “The single best live langoustines on the planet.” shouting at me from the menu, I knew I had to try one.  But what, I wondered was the difference between ‘Jumbo’ and ‘Extra Jumbo’?  After our server quipped that the difference was “five dollars,” I went with the Extra Jumbo and crossed my fingers.

The Extra Jumbo Langoustine arrived, and we immediately dubbed him Giuseppe.  And with my trusty shellfish fork, I was able to pull the meat from my side with one tug.  Unfortunately, I put slightly too much English on my tug, and as a result, half of Giuseppe’s insides landed next to the leg of my chair.  Now, I know what you’re thinking; but I bent over, grabbed poor Giuseppe (well, the half of him that was lying there), gave him a quick rinse in my water glass, looked at Dawn (who was laughing) and proclaimed “If you can’t eat off the floor at Wynn, where can you?  Also, Five-second Rule!”  Then, with a flourish, proceeded to drop Giuseppe (none the worse for wear) into my mouth.  He was delicious.

To conclude our meal, we savored some espresso.  Then we strolled down the Wynn Esplanade, stopping briefly by the waterfall (where we simultaneously said something to the effect that Wynn never ceases to amaze, turned to look each other in the eye, and yelled “Jinx!”), and continued across the sky-bridge, through the Palazzo, and to the Venetian Theatre – laughing and gabbing the entire way.

What a wonderful way to start such a memorable evening!