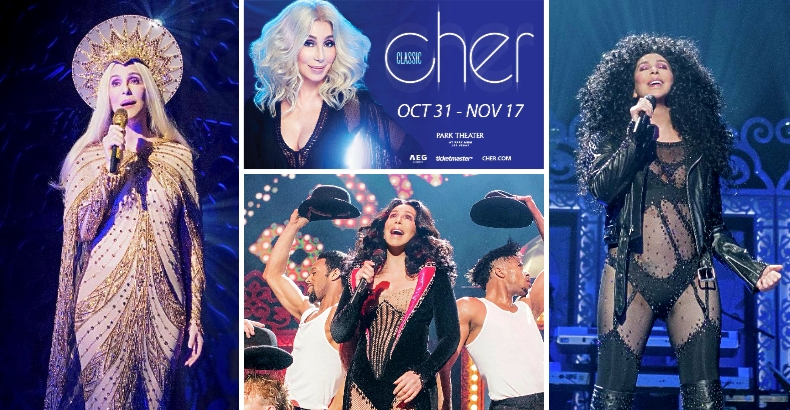 Daylight Savings recently passed, we all had to turn-back-time; and if that doesn’t bring Cher to mind, I don’t know what will.  Let’s face it - there really is no diminishing return on Cher.  She’s still doing what she’s always done, and that’s be the Cher-iest Cher she can be.  Now, as she returns to Las Vegas for the final 2018 shows of her Classic Cher residency in the Park Theater at Park MGM; the question isn’t if you’ll see Cher, some much as when.

The iconic EGO (who might well be an EGOT after next year’s Tony Awards, thanks to The Cher Show*) has been schlepping back and forth, from coast-to-coast; presenting Classic Cher not just at Park MGM, but also outside of Washington D.C. at The Theater at MGM National Harbor, and up in Atlantic City, at the Borgata Event Center.  And you might think this self-proclaimed “granny” would be over it; but it’s like my pal Jimmy James has been saying since the ‘90s, “After the nuclear holocaust, all that’s gonna be left are cockroaches and Cher.”

So, why should you go see this woman who’s not only won an Oscar, a Grammy, an Emmy, and a trio of Golden Globes, and four Billboard Awards (including last year’s Icon Award); but has also received the Kennedy Center Honors, a Hasty Pudding Theatrical Award from Harvard University, and upon whom was bestowed a special CFDA Influence-on-Fashion Award?  Well, besides having colored our lives with that singular coloratura voice that she wields so passionately, she gives her fans precisely the show they want to see, and it’s wonderful.

It should go without saying (but it doesn’t, so I’ll say it), when you've been serving the hits for as long as Cher has (she’s the only artist to have a single top the Billboard charts in six consecutive decades), your catalogue – even just the hits – is far too expansive to be condensed into one concert.  So, as a concertgoer, you're just gonna have to acquiesce to the notion that you aren’t gonna hear every Cher hit – “Song for the Lonely,” for instance; or her cover of Bob Dylan’s “All I Really Want to Do,” or even her cover of Pat Benatar’s “Love is a Battlefield,” for that matter.

But, don’t you fret, because in addition to the myriad other Cher-if songs that you’ll know and love, she’s added a trio of covers by that lovely Swedish quartet known as ABBA  – “Fernando,” “SOS,” and “Waterloo” (since I know you were wondering) – from her recent Dancing Queen album.  Hearing them will have you thinking you’ve been transported to that little island from Mamma Mia (or at least a nearby discotheque).

So, go for the music, go for the costumes, and go for the dancing (led by the fabulously talented Melanie Lewis-Yribar); but go while you can; because she’s only in Las Vegas through November 17th, and Cher won’t be back until March 2019, for the twelfth and final leg** of Classic Cher – that not-for-nothing, she’s managed to squeeze between the two legs of her Here We Go Again Tour.***

Get into it!
#Cher

[Editor’s Note: * In previews since November 1st, The Cher Show opens on Broadway, at the Neil Simon Theatre, on December 3rd // ** That we know of, at this time // *** The tour began with a leg in Oceania (Australia, New Zealand), this past fall; and concludes with another in North America (US, Canada), this coming spring.]