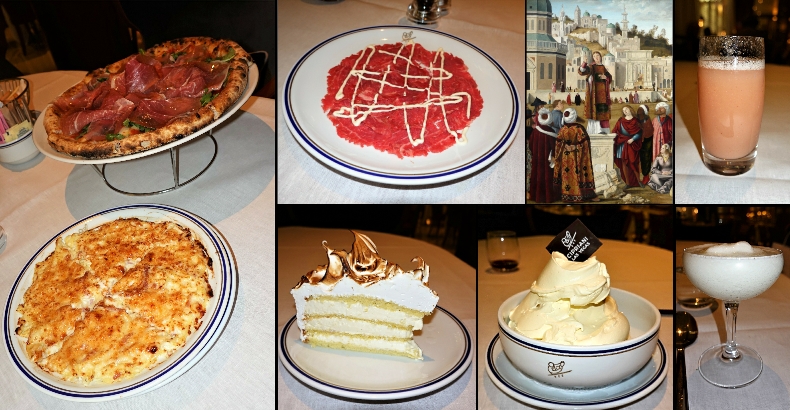 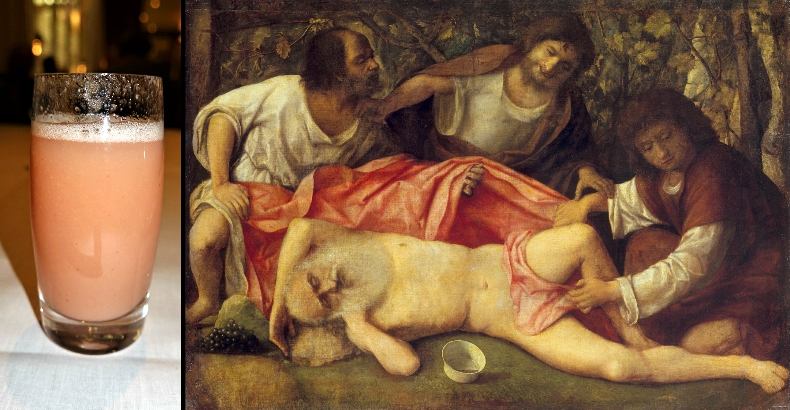 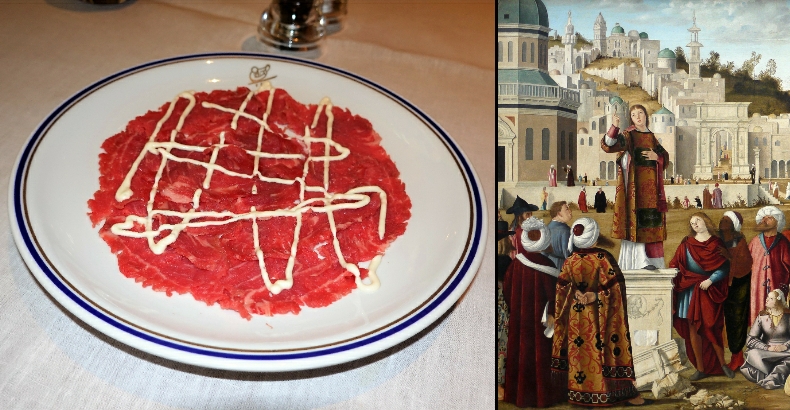 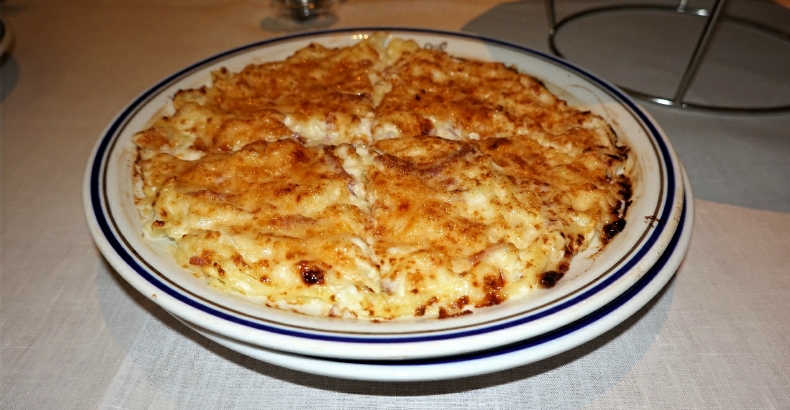 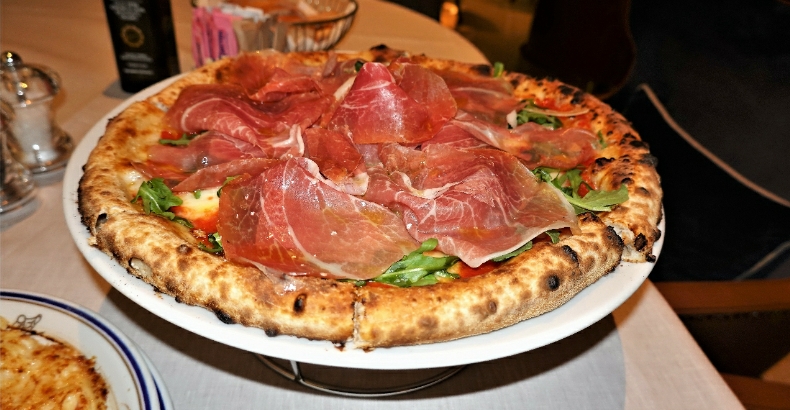 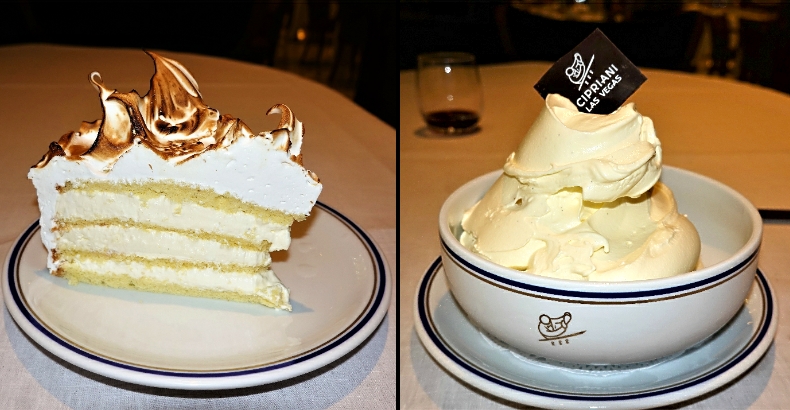 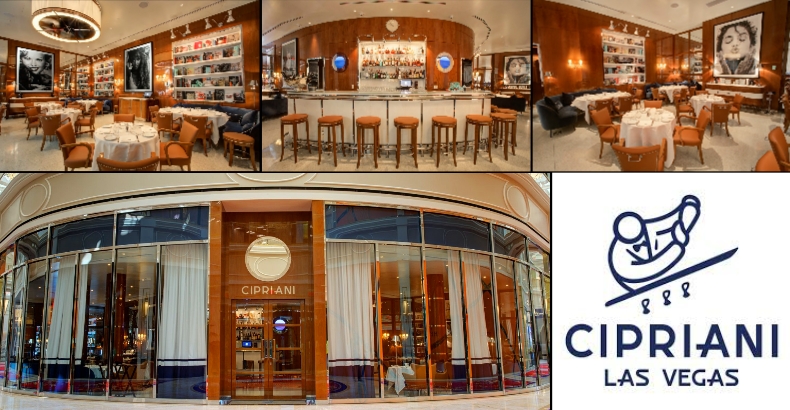 Picture it: Venice, 1948.* The war over, a successful local restaurateur with a love for the white peaches that grow in Italy during the summer months, attends an exhibition of the Renaissance painter, Giovanni Bellini (1430-1516).  There, he notes that the pinkish glow found in some of the garments rendered in paintings such as The Drunkenness of Noah (1515) is the same hue as the unnamed specialty cocktail he’s been serving since creating it, back in the 1930s.  He takes this as a sign and decides to at long last christen the drink (made from two parts Prosecco and one part white peach purée) after the painter. That savvy barman was Giuseppe Cipriani of Harry’s Bar, and that’s how The Bellini got its name.

Now, picture it, again.  Only this time, Cipriani visits an exhibition of artist Vittore Carpaccio (1465-1526), at the Palazzo Ducale.** There, he lays eyes on the Venetian artist’s 1514 work, Il Sermone di Santo Stefano (on loan from The Louvre).  A short time later, Cipriani’s friend, the Contessa Amalia Nani Mocenigo (a regular at his establishment), informs him that she is under strict doctor’s orders to eat only uncooked foods, especially red meat (methinks she might’ve been anemic). Wanting to create something special (and flavorful) for the gloomy Contessa, he takes for his inspiration the Piedmontese specialty Carne Cruda all’Albese; but in lieu of the arugula and Parmesan cheese that traditionally tops the dish, he naps the thinly-sliced beef with a custom sauce of mayonnaise, Worcestershire sauce, a splash of milk, and some lemon.  As a final flourish, he names his creation Carpaccio, as the plated dish remind him of the garments painted in the foreground of the artist’s masterwork.

It takes a lot to create a recipe that becomes part of the international epicurean vernacular.  That Cipriani created two at Harry’s Bar – well, that’s the proverbial stuff-of-legends.  Now, fast-forward seventy years.  It’s 2018, and Giuseppe Sr.’s grandsons, Ignazio and Maggio, have opened Cipriani Las Vegas, bringing these and the rest of their great-grandfather’s gastronomic goodness to Wynn Plaza at Wynn Las Vegas.   And apparently you can take the boys away from the sea, but you can’t take the sea from the boys; because the décor is decidedly yachtlike, with burled walnut that’s been polished to a high-gloss finish, chrome accents, caramel-colored leather chairs, supple velvet baqnuettes, and terrazzo floors.  Over it all, the countenances of Cindy Crawford, Naomi Campbell, and Claudia Schiffer gaze at the diners, from the frames of Marco Glaviano’s large-format black-and-white portraits.

And while it’s great for dinner, I’ve gotta give it extra props for lunch.  Recently, after already having dined there, a couple times, I figured “Hey!  Why not lunch?” And it was fantastic!

We started with the aforementioned Bellini, before digging into the Burrata “alla Mediterranea” (with chopped cherry tomatoes and black olives); while this was followed by the Carpaccio “alla Cipriani” (the backstory to which I’ve already regaled you) – which tasted, smelled, and looked as lovely as a dish so-storied should.  All of these were terrific starters, but the real magic began when the more substantial dishes were served.

I love Cipriani’s Tagliolini Gratinati al Prosciutto di Praga (aka Baked Tagliolini with Praga Ham***); and despite remembering that at they’d served small portions on bread-plates, figured a whole order would be fine for two.  (FYI – When people describe it as “rich” that’s a vast understatement.)   It was amazing, but a little goes a long way with the crispy, cheesy, meaty dish; so, I ended-up taking half of it home.  As for the Capricciosa Pizza (with tomato sauce, mozzarella, rocket salad, and more of that yummy Praga Ham), which came next; it’s rather akin to a great grilled ham and cheese sandwich on a marvelously crispy crust, and is just fantastic.

And then came the desserts.  I’ll be the first to admit that I rarely if given the choice, opt for vanilla.  Nothing against vanilla, but it’s just not one of my go-to flavors (which would be coffee for ice cream, and chocolate for cake); but at Cipriani, vanilla is elevated to such soaring heights, that it’s the rare exception to my rule.  First is the Gelato di Vaniglia al Momento (aka Vanilla Ice Cream à la minute), that comes simply enough in a large bowl, with caramelized nuts and chocolate sauce, and is meant for two or more.  With more sugar than the ice cream you’d find at Baskin-Robbins, and whipped into velvety softness, it’s just sublime.  The second vanilla dessert that is absolutely worth trying is the Meringata alla Crema (aka Vanilla Meringue Cake).  An eight-layer(!) cake that alternates very thinly sliced layers of sponge cake with sweet vanilla cream, and topped with meringue that’s been beautifully brûléed so that the peaks are caramelized.  This cake is so good that once upon a time at Cipriani Wall Street, foodie Claire Robinson once famously “fought” Denzel Washington over the last slice.  Listen to her talk about the deliciousness, in the video, below (from Food Network's Best Thing I Ever Ate).

Look at me, touting vanilla desserts.  Who’d’ve thunk it?

Get into it!
#Cipriani

[Editor’s Notes: * Said using my best Sophia Petrillo affect // ** Coincidentally, Carpaccio studied under Gentile Bellini (1429-1507), the older brother of Giovanni (the cocktail’s namesake), who – during the beginning of their careers, at least – was the more highly regarded artist //  *** Praga Ham (aka Prague-style Ham) is a brine-cured, stewed, and slightly beechwood-smoked boneless ham, that is one of the city’s culinary claims to fame and dates back to when Prague was part of Bohemia]