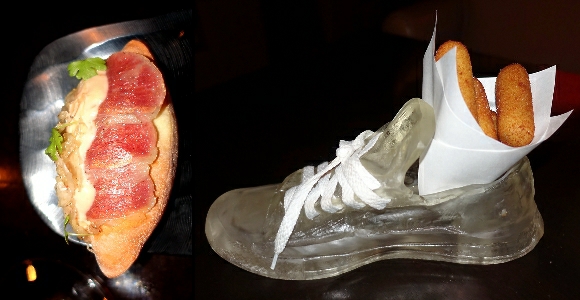 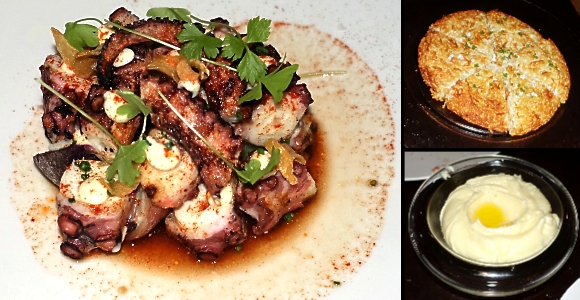 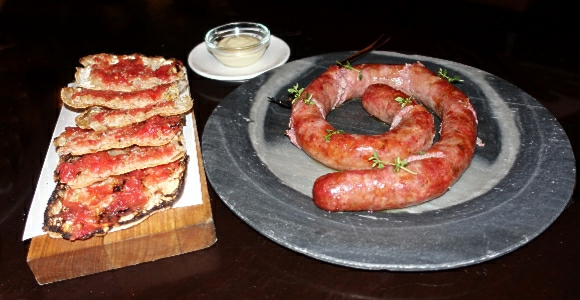 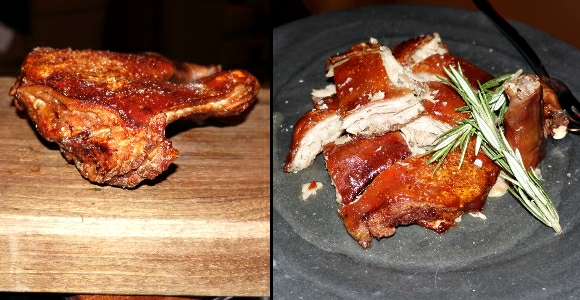 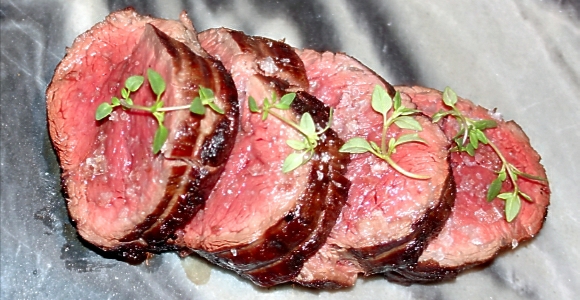 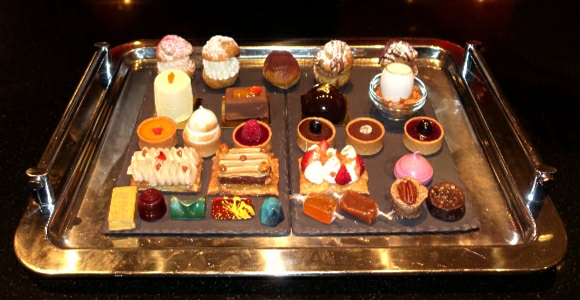 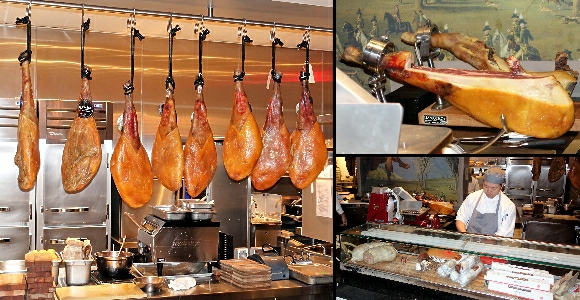 For whatever reason, I had yet to dine at SAHARA Las Vegas' signature fine dining experience (for it truly is an experience), Bazaar Meat by José Andrés.  But, as my mom was spending a few nights in the hotel’s Lux Tower; I figured then that the time was now.  And since we’re about to enter the 2020 Olympics madness, here’s a metaphor for you – a meal at Bazaar Meat is a marathon; not a sprint.  But what a delicious marathon it is.

The restaurant is lovely (designed by Philippe Starck), with dark rich wood tables, and supple leather chairs, offset by exhibition kitchens and stations, and a variety of mismatched chandeliers embodying Starck’s signature whimsy.  And the menus.  While slightly unwieldly (they’re enormous), they’re both easy to read and to comprehend.  Furthermore, the servers are at the ready, like culinary concierges, to curate your meal.  So, we started, as people do, at the top; and simply made our way down, over and down, once more.

From the Some Little Starters section (Andrés’ reputation was built on his having brought the “small plates” concept to America), we started with the Rueben – and FYI, my tongue is watering as I type this, but be forewarned, it’s not made for sharing; so don’t share.  If someone decides they “just want a bite,” tell ‘em to order their own!  After our Reubens, in short succession, we were served the Bagels and Lox Cone (molecular gastronomy in Vegas!), and the Croquetas de Pollo and the Croquetas de Jamón – fritters of chicken and ham, respectively, that are little fried balls of creamy, meaty goodness – served in a frosted glass sneaker (more of that signature Starck whimsy, again.  Oh, Philippe…)

We glossed right over the sections entitled “From the Raw Bar,” and “From the Meat Bar” (with their subsections of “Seafood,” “Oysters,” and “Caviar Flights;” and “Tartares,” “Carpaccios,” and “Cured Meats”); and flipped to the backside of the menu, where we entered the “From the Fire Pit” portion of the evening.

Fêted as the “heart and soul” of Bazaar Meat, the Suckling Pig was ordered the minute my eyes saw it on the menu.  Technically, it was a quarter of a pig, but that was plenty.  When done properly, Suckling Pig is the Peking Duck of pork; and this one was done to perfection: The skin was crispy, while the flesh was tender and succulent.

From here, we bounced over the “’Vaca Vieja’ Rib Eye Tasting,” “Wagyu,” and “Our Big Guys” sections; and dove into that for “Meats of the Sea.”  From here, we ordered the Grilled Pulpo a la Gallega – Galician-style octopus, grilled with potato and pimentón – prepared to the ideal texture, with a mere whisper of zestiness.

Next were our selections from the “More Than Meats The Eye” section.  We ordered the Châteaubriand (because, frankly, it’d have been a shame not to have gotten some steak at such a celebrated steakhouse), and the Butifarra Spiral.   The Châteaubriand was simply seasoned (i.e., not too much pepper), with a nice Perigord sauce; and was so tender that it reminded me to book a massage for later in the week.  Now, the Butifarra Spiral was really something special.  A Catalan-style pork sausage, with Pà Amb Romàquet (the crispy tomato bread seasoned with olive oil and sea salt) and a honey aioli; it was piquant without being spicy; firm without being hard or gristly; and despite what I might’ve been expecting, not at all gamey.  In a meal that consisted of a number of fantastic parts, it was stellar and game-changing.  What really amused us both, was that upon being served, our server wielded a large pair of scissors, with which he proceeded, like a charcuterie mohel, to perform a bris upon our Butifarra.  L’chaim!

From the bottom of the menu, whence came the “Vegetables & Salads,” as well as the “Potatoes,” we selected the Pommes Paillasson (pretty much the least kosher giant latke, ever; as it’s made with bacon and cut like a pie); and the Robuchon, which is a tip of the toque to gastronomic giant, Joël.  With a consistency closer to mayonnaise than mere whipped potatoes, the secret is lots, and lots, and lots of butter; with some drawn butter poured on top for presentation.  My arteries began to harden the moment it was placed on the table, but my mother said they were a wonderful accompaniment to the Châteaubriand.  That said, a little went a long way, as we ended up with copious amounts of leftovers.

Finally, there remained only one final portion of the meal for us to conquer, and that was dessert.  A tray with far too many varieties of deliciousness for me to describe was brought to the table, and was accompanied by very in-depth, morsel-by-morsel descriptions.  We opted for a quintet that included four tiny tartelette-sized versions of Pecan Pie (yum!), Lemon Meringue (mmhmm…), Chocolate Peanut Butter (a decadent tartelette that puts anything by Reese’s to shame), and Dark Chocolate (is it creepy to describe a dessert as sensual?), as well as a Chocolate and Olive Oil Cream Puff (beyond).

And lest one thinks that we were the only ones kvelling over our meals; we were given a brief tour of the restaurant upon our arrival, and had observed similar gushing coming from the occupants of the restaurant’s other tables.  At the time, we were puzzled (haven’t these people ever eaten in a restaurant, before?).  Fast forward a half-hour, and a similar cacophony of satiated sounds could be heard from our table, too.

A very chic and clever take on the gourmet steakhouse – while I couldn’t eat every night like I did at Bazaar Meat – I shall return, and look forward to so doing.