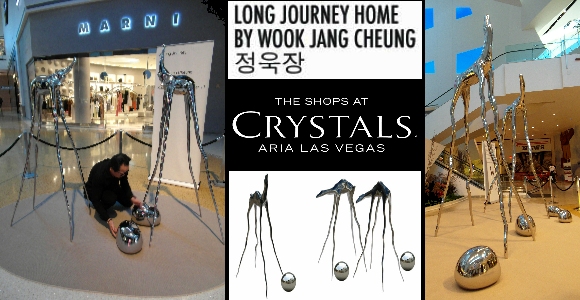 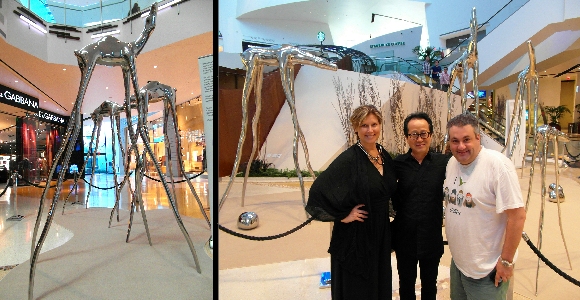 The new exhibition by South Korean sculptor, Wook Jang Cheung, Long Journey Home (sponsored by JSM Art of China, under the supervision of Shunmei Jin - and transported to Las Vegas through the facilitation of Shanghai-based Viva Tours), opened at The Shops at Crystals, the same day I underwent my recent knee surgery. As such, the curator of the exhibit, Dr. Laura Henkel (of the Sin City Gallery) arranged for me to meet with the artist (as well as his translator, an aide, a representative of Viva Tours, and the lovely Mrs. Cheung), the day prior; as he put the final touches on the placement of his sculptures.

Having been displayed all over the globe, from Korea and Japan, to Italy and the United States, Wook Jang Cheung’s sculptures have been included in more than 100 group shows and been the subject of 13 solo exhibitions, over the course of his three-decades long career; that began with his earning a BFA and MFA from Seoul National University. Currently a professor, at Ulsan University, Wook Jang Cheung is a member of the Korea Fine Art Association.

Equal parts surrealistic, futuristic, and sci-fi; while being representative of both flora and fauna; Cheung’s menagerie of long-legged mammals includes dromedaries, polar bears, pachyderms, and deer. Representative of the roots of a plant, the long legs are also an expression of the “empty space” that is Long Journey Home’s leitmotif.

And while the first things that came to my mind were a pair of Hollywood sci-fi references (the Imperial AT-ATs from 1980’s Star Wars Episode V: The Empire Strikes Back; and the creepy liquid-metal T-1000 from 1991’s Terminator 2: Judgment Day); the artist assured me that the shiny metal skins are an allusion to the organic fluidity of the Taoist principals, to which he subscribes.

Why Crystals? Aside from the high and airy spaces that make The Shops at Crystals such an ideal venue for the long-legged creatures that comprise the various vignettes of Long Journey Home (placed throughout the luxury-shopping Mecca); “I have a great relationship with Las Vegas. Las Vegas is my friend. From the first moment I arrived here, in Las Vegas, I knew that it was the right place for my sculptures.”

Tall, shiny, futuristic, and new? Yup. Wook Jang Cheung has certainly found the right venue; and the right town, to showcase his work.