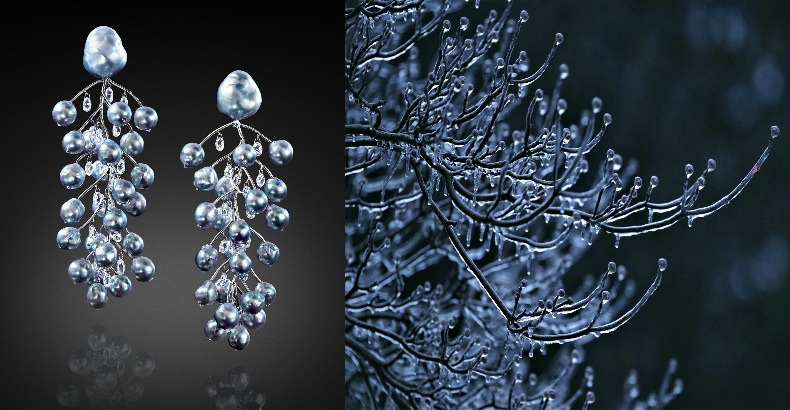 There are scads of designers who work with pearls (as well they should, because pearls are awesome!); but only a handful of those are categorizable as what I refer to as “pearl people.”  And, while I would certainly include such incredibly innovative international companies as Mikimoto (Japan), Yoko London (UK), Moksh Jewellery (India), Yvel (Israel), Mizuki (US), Autore (Australia), and Robert Wan (Tahiti) in this category; my go-to “pearl people” are the friendly folks at ASSAEL. *

Whether collaborating with such sought-after designers as Alessio Boschi, Angela Cummings, Julie Parker, Reho Concepts, and perhaps most notably, Sean Gilson (whose insanely wearable, award-winning “Bubble” collection deftly dispels the notion that fine jewelry cannot be fun jewelry), or working with their talented in-house craftspeople; Christina Lang Assael—who has overseen all aspects the company (founded by her father-in-law, James Assael, in the 1920s) since the 2011 passing of her husband, “Pearl King” Salvador Assael—and Peggy Grosz (VP and head of Product Development) have seamlessly extended the ASSAEL legacy while producing designs that adroitly straddle the classic and the contemporary.

Look at ASSAEL's new “Winter Branches” earrings for an exquisite example of this: Decidedly contemporary earrings that are inarguably imbued with ASSAEL’s spirit of design.  Following the colorful “Fall Branches” earrings featuring Fiji pearls in autumnal hues, “Winter Branches” is the second seasonal variation of the Four Seasons Earrings Series and features a pair of 18mm cultured South Sea pearls from which a network of articulated platinum ‘branches’ are suspended.  These ‘branches’ are hung with 48 cultured baroque blue Akoya pearls (ranging in size from 7.5mm to 9mm) and 14.82cts of oval diamond briolettes.  The earrings are finished with 0.67cts of round diamond details.

According to Grosz (one of my favorite jewelry storytellers), after the success of the “Fall Branches” Earrings, they decided to make an entire series, featuring all four seasons.  Grosz recalls that ASSAEL had just acquired these shimmery bluish-silver Akoya pearls that she felt evoked the sight of sun sparkling on snow.  Then, she and Assael remembered some pairs of matched baroque South Sea pearls that also featured an unusually deep bluish hue, and thought that they might pair nicely with the Akoyas while acting as a perfect foundation for the branches they’d envisioned for these earrings. “We jumped up to get them from the vault… And the colors worked, big time!”  Speaking to the intensity of the pearls’ coloring, Grosz explained “Both the blue of the Akoyas and the blue of the South Seas are unusual.  That they are the same is crazy, as they come from completely different oysters in different bodies of water!” **

And while sometimes I like to let the beauty of a jewel do the talking, so much went into the construction of these earrings, that I’ve insisted that Grosz tell me about the three things they did to ensure that the earrings didn’t just hang correctly, but were comfortable to wear, as well.

“We had to consider weight and wearability,” so here’s what they did.  First, knowing that the ‘branches’ had to be thin (to minimize the weight), but also strong (to last forever), the decision was made to use platinum (as it is far more dense, durable, and ductile than gold).  Next, the craftsman formed the platinum on the back of the baroque South Sea pearls to ‘anchor’ the large pearls, with clips (to which the eventual owner has the option of adding posts) being angled to further control the earrings’ position.  Finally, adds Grosz, “We knew that these ‘branches’ would need to be articulated; to move and flex at very precise points.  A rigid or stiff earring would be unacceptable as they never look beautiful on the ear; so, we played with the points of articulation until they appeared fluid and natural when [the wearer’s head was] moving.”

One thing about these earrings that Grosz points out is that due to the colors of the pearls (silver with a bluish hue), the diamond briolettes had to be extremely ‘white’ (aka colorless) to really pop.  This is significant as the rough diamonds usually cut as briolettes tend to be slightly ‘off-color,’ so sourcing the rough for these ‘white’ briolettes was more involved than it might otherwise have been, and once located, they still had to be cut.

So, what’ll it cost you to have these dazzling one-of-a-kind danglers swinging from your lobes?  As JP Morgan aphoristically quipped in 1906: If you have to ask... ***

Get into it!
#Assael

[Editor’s Notes: * ASSAEL also happens to be my go-to for all things coral, but that’ll keep for another time… // ** Akoya pearls come from the Pinctada fucata oyster and hail mostly from Asia.  South Sea pearls come from the Pinctada maxima oyster and hail mostly from Australia. // *** Upon being asked, in 1906, by Henry Clay Pierce about the cost of keeping a yacht, J. Pierpoint Morgan, Sr. is said to have snarkily replied by saying “If you have to ask, you can’t afford it.”]