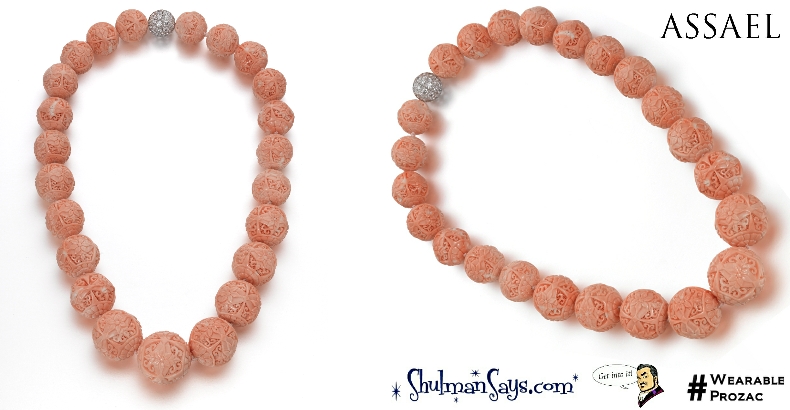 I love walking the floor of COUTURE, each year – both for the sparkly goodness that fills the room, and also for the occasional piece that makes my jaw drop.  As time goes on, my jaw drops with less frequency; due, I suppose, to my becoming more jaded (pun intended).  But every now and again, something will stop me in my tracks, and require me to lift my jaw from the Wynn’s beautifully carpeted floor.

Last year, among the dazzling pieces being shown by Arunashi, Coomi, Fabergé, Lydia Courteille, Pamela Huizenga, Paula Crevoshay, Sevan Biçakçi, Todd Reed, and Victor Velyan that found me salivating (as expected); it was – of all things – a coral necklace that stopped me in my tracks.  But this was no mere strand of coral beads.  Rather, it was a gorgeous, museum-quality necklace of graduated, hand-carved Angelskin Coral beads, being shown by Assael.  And it had one heckuva provenance!

More than a half-century ago, in 1965, Asprey - Britain’s prestigious purveyor of luxury goods - approached one of Southern Italy’s great multi-generational dealers of coral*, to procure the necessary quantity of Angelskin Coral to make a necklace of graduated carved beads, intended for a member of the British Royal Family.

Once obtained, the beads were sent to China, to the famous Beijing School of Master Carvers, which was founded by Emperor Qianlong, in the 1700s; and then dissolved by Chairman Mao, during the Cultural Revolution.

Spending an average of five months to hand-carve each of the twenty-three beads, it took ten years to complete.  Naturally, each bead took a different about of time, based on the bead’s size, and its carver’s speed and technique.  And while we don’t know how many beads might have been destroyed in the creation process, we are able to see that a number of different styles of carving were used; indicating that multiple carvers were involved, over the course of the ten years it took to create this unique piece.

A decade later, in 1975, the carving completed and the necklace made, the dealer returned to Asprey, to turn over the exquisite necklace – consisting of 23 graduated hand-carved beads of Angelskin coral (ranging in size from 21.00mm to 32.30mm), with an 18k gold ball-clasp set with 98 diamonds (15.64cts); only to find out that that, so many years later, none of the remaining members of the Royal Family could remember making the request.

The coral producer, knowing that it was a work of art for the ages, happily retained the necklace, and put it in a safe; where it remained until being sold (along with other fabulous strands of coral) to Christina Lang Assael, in 2016.

Now, more than a half-century since its creation was undertaken, this one-of-a-kind piece of art is being presented to the public, by Assael – one of the world’s leading purveyors of pearls, specializing in haute joaillerie and precious stones.  Though it has not yet been separately appraised; when one takes into account its provenance - that the commission came from a member of the British Royal Family, and that the decade of hand-carving was arranged by Asprey - the value of this museum-quality jewel is staggering. Furthermore, unlike most coral (which is sold by weight) these beads are disproportionally lighter than other beads of this size (due to the amount removed by the carving); but, since the carving is more valuable than the weight, it’d be an injustice to have an officially stated weight.

Get into it!
#Assael

[EDITOR’S NOTE: As the name of this family is proprietary to Assael; I could tell you, but then they’d probably have to kill me…]