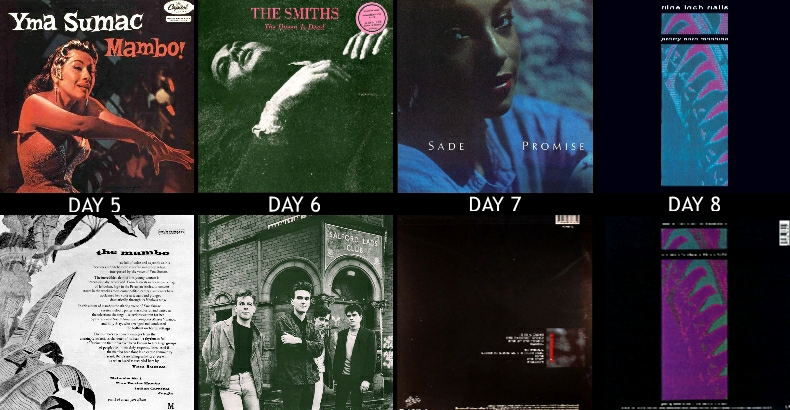 It was my roommate Armen Ra, who introduced me to Yma Sumac, at our apartment in the West Village (c.1997), though inadvertently.  He’d been telling me how, when he’d first played Nina Hagen for his mother, Ruzanna; she’d said that it reminded her of Yma Sumac. Which, to my 26-year old ear, sounded like a perfectly rational comparison; except that he was only just introducing me to the former, and I’d never heard of the latter.  Well, as soon as I said so, he was up like a shot, flipping through a mountain of CDs, until he surfaced, wielding Mambo!.  It was transportive – and to this day, it’s a jolt of sheer vocal acrobatics.  Every time I hear Sumac, I’m suddenly whisked to a place, high in the Andes, where the last Princess of the Incas sings, caws, squawks, croons, and gutturally intones with a 5-octave voice that ranges from the exotic to the divine to the extraterrestrial.  Also, Yma is one of those people that you slip into a set, and those who’ll no doubt turn out to be the coolest kids in the room, will look up, and nod; or stop be the DJ booth and say “Yma Sumac. Nice…” (not that that’s a reason to play a record; but it sure ain’t gonna kill my mood!)

When a few pals who were into The Smiths played The Queen is Dead for me, I flipped.  Sure, Messrs. Marr, Morrissey, Rourke, and Joyce had parted ways a couple of years earlier; but that did nothing to quell my love for them (which led to my going and acquiring the rest of their catalogue and reveling in it). Rare is the album that features nary a flop nor a misstep; yet Johnny Marr’s music and Morrissey’s lyrics were so well-matched that the duo was able to produce this seamless collection of songs, that has only become all the more impressive in retrospect. Whether the blistering  “Bigmouth Strikes Again,” the crassly comedic “Frankly, Mr. Shankley,” or the three-hanky paean to suicide that is “There Is a Light That Never Goes Out”—the last widely acknowledged as the most well-balanced display of Marr’s and Morrissey’s respective talents. That the odds of a reunion are floating somewhere between ‘slim’ and ‘none’ does nothing to quell my hoping against hope that some higher power will see fit to “[let me, let me, let me] let me get what I want, this time.”

Favorite Songs: “Bigmouth Strikes Again” / “There Is A Light That Never Goes Out” / “The Boy with the Thorn in His Side”

I didn’t require being ‘taught’ about Sade, because I grew up in the Eighties; and between having a radio and MTV (as well as ears and eyes), I was soaking in the English band’s quiet storm of sultry and jazzy sophisti-pop. And while I’ve found the music created by Sade (the band comprised of Sade Adu, Paul S. Denman, Stuart Matthewman, and Andrew Hale) to be the sonic equivalent of heaven on a Triscuit; I daresay that nobody has done more with a pair of chunky gold hoops and a bold matte red lip than the band's namesake vocalist. Then, when I’d moved back to New York, in the late nineties, I became aware that the woman who’d appointed herself my surrogate big-sister among the Downtown Demimonde—the mono-monikered Parisian model and singer, Edwige; who’d been a muse to Pierre et Gilles, Thierry Mugler, Maripol, and Jean Paul Gaultier, and been dubbed the ‘Queen of Paris Punk’ by Andy Warhol—had been the inspiration behind “The Sweetest Taboo” (Word?  Word.), that I really sat and examined the lyrics I’d been singing along to, for fifteen years.  That it remains one of the great love songs of the last forty years simply makes it that much more poignant to me.  Meanwhile, the languid manner in which “Is It a Crime” soars and dips has ensured that it’ll always be the first song I play, upon dimming the lights, and lighting some candles, before slipping into a hot bath.

Favorite Songs: “The Sweetest Taboo” / “Is It a Crime” / “Never as Good as the First Time”

It was senior year, and my girlfriend, Liz* was more than a bit obsessed with Trent Reznor and his band, Nine Inch Nails.  So, over the course of our relationship, I became a fan by osmosis, of this artist who approached a genre known for mind-numbing mechanical repetition (i.e., industrial rock) with the musicality and sensibilities of another (synth-pop); thereby countering the dehumanizing of the former, with the emotional exposition of the latter. Is it any wonder that, after we broke up, I had Pretty Hate Machine’s “Something I Can Never Have” in heavy rotation** (which, in those days, required a lot of rewinding)?  While others might cite “Head Like a Hole” as their go-to track from NIN’s debut studio album (that, due to disputes with TVT Records, had been out-of-print since 1997, until being re-released by Rykodisc, in 2005); it’s always been the searing and poignant emotions expressed by Reznor in "Something I Can Never Have" that most move me.

[Editor’s Notes: * Look, I’m not ashamed to admit that I dabbled with heterosexuality.  What can I say?  It was the Nineties. // ** Other songs in this limited rotation included “Pictures of You” (The Cure), “I Dreamed a Dream” (Patti LuPone with the Original London Cast of Les Misérables), “Listen to Your Heart” (Roxette), and “Please, Please, Please, Let Me Get What I Want” (The Smiths).]