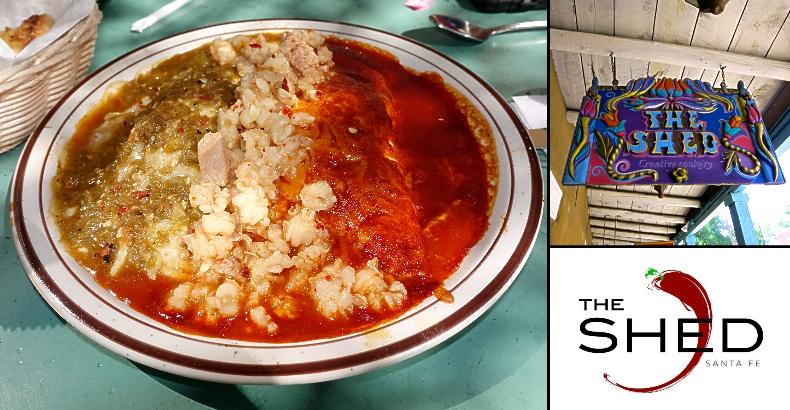 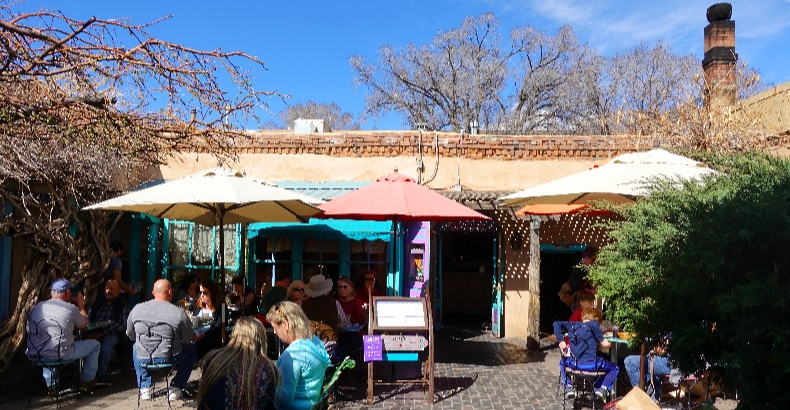 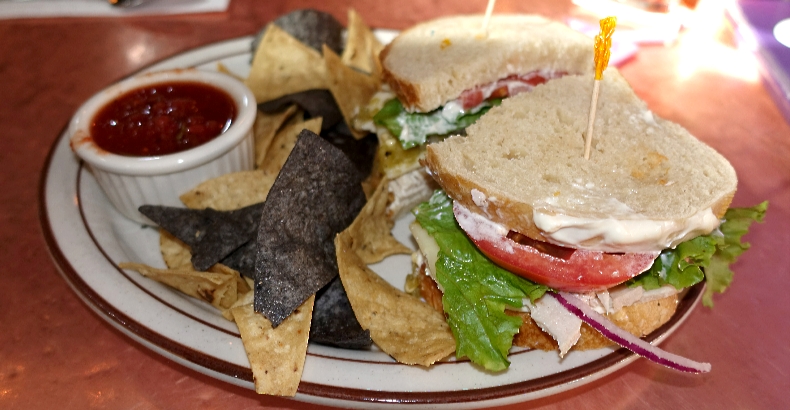 Back in college, one of my closest chums, Marlo, was from Santa Fe; and nothing was ever spicy enough, for her.  Regardless of the cuisine or the restaurant, she always had to have things made spicier; and we would all chuckle about it.  Fast forward to one week after my first trip to Santa Fe, and – now that the sensation has returned to my mouth – I get it.

So, I arrive in Santa Fe, and my pal, Katherine Jetter, had come to pick me up, for lunch.  As we left the lobby of La Fonda on the Plaza, Katherine asked if I liked Mexican food, and upon hearing my response (“Uh, yes, please!”), we walked the block to Prince Patio; where in 1879, Governor Bradford Prince set-up shop with his family – after purchasing the trio of patios surrounded by eighteen rooms, from the descendants of Captain Diego Arias de Quiros (who had himself been given the land, in 1692, by Charles II of Spain**).  Governor Prince’s peeps held onto the property, until the ‘40s; and in 1960, Polly and Thornton Carswell took it over, with their successful restaurant, The Shed (that had outgrown its original location, on Burro Alley).

When we had taken our seats, on the patio, and looked over the menu; I located the section entitled “New Mexican Entrées,” and my eyes settled on the Chicken Enchilada Plate.  Featuring chicken, cheddar cheese, and onions, rolled in two blue-corn tortillas (for which they graciously substituted a pair of flour tortillas).  And while the menu offers a choice of red or green chile; I ordered the off-the-menu option of combining the two, in what the locals call “Christmas” style.  The plate came with pinto beans (which I opted against), and Posole – the pueblo stew of Nixtamal corn, lean pork, coarse red chile, garlic, and oregano – which I consumed, eagerly.  Also, in keeping with tradition at The Shed, my New Mexican Entrée came with a basket of French Garlic Bread.

I can pretty much described what followed as an epicurean revelation.  It’s all about the chiles at The Shed; and those chiles come directly from the farm, and are ground on-premises, to guarantee their freshness.  Ooooo-Wee!

The lunch was so good, in fact, that, the following day – wandering around, by myself – I headed back to The Shed, and repeated my lunch of the previous day; only this time, I went all-red with the chiles.  Then, on my third day in Santa Fe, I went back, again.  I’d noticed that in Santa Fe, people look for different ways of incorporating chiles into what would be served elsewhere as chile-free meals. So, I ordered the Oven-Roasted Turkey Breast Sandwich.  Served on sourdough, with thickly sliced fresh turkey breast, Swiss cheese, roasted green chile, lettuce, tomato, red onion, and mayonnaise; it was among the best turkey sandwiches I’ve ever had.  Who knew? And it was certainly the only one that left my taste-buds numb until dinner!

The Shed’s founders passed the restaurant and its traditions onto their son, Courtney, and his wife, Linnea; who, in turn, brought in their kids, Josh and Sarah, to work with them.  A family affair, The Shed makes everyone feel welcome.  Expect to leave sated, but perhaps with a few fewer taste-buds.