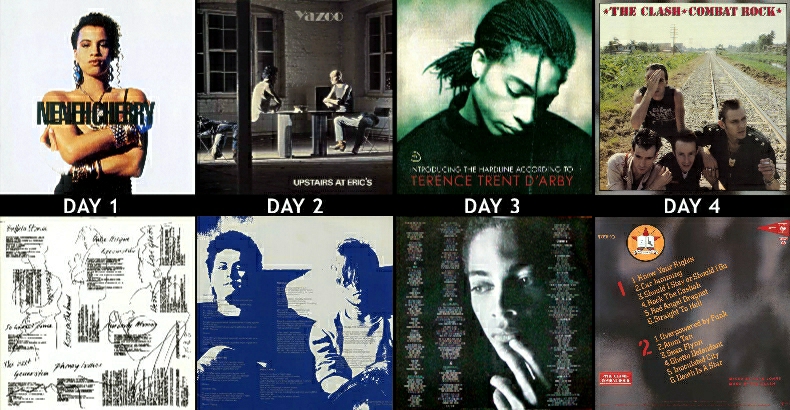 Recently, I was asked to share ten of my all-time favorite albums, on social media (you know how those things go).  Here’s a rundown of what I picked, and the rationale behind each. The assignment had been  to post one album, each day, without any explanation; every day for ten days.  The albums were to be those that had made an impact on my life and affected me; and still remain in my ‘active rotation’ even if only now and again.  Now, this was not a definitive list of “My All-Time Favorite 12 Albums” (nor even what I thought were “The 12 Best Albums of All-Time;”) but rather 12 of what might well be a list of fifty or a hundred albums.

I got a bit fancy (as one does), and instead of merely posting an album’s cover, I also posted the back cover; as well as a photo of that album, being played on a turntable (thanks Google Images!),  Since a number of people reached-out to commiserate over or inquire about each of my posts; I figured I'd save us all some time, and just tell y'all about it.  And, for those of you who picked-up on the fact that I was asked to pick ten albums, but I’ve compiled 12 for you, here; it boils down to the fact that the artwork for four albums fit on each slide, and three slides allowed for a dozen albums. Ta-dah!

Finally, for your viewing pleasure, I’ve embedded a clip of my favorite song from each album.  Enjoy.

When I first heard Neneh Cherry’s “Buffalo Stance,” something in my head just clicked.  I was 15, and already DJing at most of my prep school’s bi-weekly dances.  I wasn’t the most talented of the half-dozen of us (somewhere in the middle); but my tastes were the least defined by any particular genre; and when Raw Like Sushi was released, the following spring, I could not wait to go out and get it, on vinyl (not to mention on cassette, for my dorm room): Thanks, Sam Goody!  The way in which Cherry effortlessly hopped between shifted genres and defied categorization is even more impressive, today; and “Buffalo Stance” remains one of my favorite tracks to play, regardless of format, or venue.

A lot of my musical influences were found at B’nai B’rith Summer Camp, on the Oregon Coast; and when I was nine (at the twilight of the era predating that whence the place was taken over by a legion of Birkenstock-shod Grateful Dead fanatics*) some of the counselors had introduced me to things recorded after 1980.  One such counselor, named Jennifer (as so many in my life would prove to be) clicked it into her boom box, one late morning, when – in what I’m sure, looking back, was a clever ruse to tire us from our sugar-highs – she decided to teach aerobics, to a gaggle of Jewish kids, between the ages of eight and twelve, on a somewhat dew-soaked tarp, on the second day of a two-night camping trip. And my world was thereafter rocked. Vince Clarke’s music was so different from anything I’d ever heard, and Alison Moyet’s voice came to define pathos to my prepubescent mind; in turns haunting, frightening, and mesmerizing me.  Besides, anyone who came of age in the Eighties, who doesn’t get even the teensiest bit misty, upon hearing “Only You,” probably has a heart of stone.

Just as I was kind of acclimating to being away at boarding school, at 14; Terence Trent D’Arby rose from the ether and blew my very blowable mind, in the most wonderful way.  He sounded like someone from an earlier era – equal parts style, sizzle, and swag (kind of how I’d imagine Prince might’ve turned-out had he been born a few years later.  And raised in New York.  And been slightly more influenced by David Bowie).  Fast-forward to five years later, when I’d experience what’s one of my favorite nightclub memories from college – boogying-down to “Dance Little Sister” (my favorite TTD jam), at the Doubloon Saloon; a micro-disco in the middle of Treasure Island’s casino floor, built to evoke an enormous skull.** That night, that club, D’Arby’s insanely danceable song, and my friend, Tara*** all intertwined for what remains one fabulous trip down Repressed Memory Lane.

Another of those BB Camp Counselors, back in the early ‘80s had a thing for wearing The Fixx, Scritti Politti, and The Go-Go’s t-shirts, and was constantly playing The Clash. It made such an impression on me, that when I was reintroduced to their music in my mid-teens, I realized I was already very familiar with their oeuvre.  A number of people will assert that London Calling is a better album, and it’s certainly the more “important” one; but Combat Rock was the one that got to me first, and stayed in my head.  I’ve found that “Rock the Casbah” can often be a perfect song, in any number of situations; but “Straight to Hell” will always be the one that makes me crank-up the volume – especially in my car.

Favorite Songs: “Straight to Hell” / “Rock the Casbah” / “Should I Stay, or Should I Go

[Editor’s Notes: *I have a huge love of and respect not only for the Dead (olev hasholem, Jerry!), but for the other three acts my narrow-minded summercamp overlords found worthy – Pink Floyd, Led Zeppelin, and Bob Marley - as well.  They're all legendary and iconic; and that's irrefutable.  Sadly, as I’d yet to inhale, their true magic wouldn’t be revealed to me, for the better part of a decade.  (Though, when that did come to pass, it was at same said camp, courtesy of my brother's best-friend, underneath a cabin that I was later proported to have "burned down.") That said, would it have killed those sonic fascists to turn the friggin’ dial, once in a while?  I was just a child, for Pete’s sake! // **Assuming arguendo I’ve got my facts right, the Doubloon Saloon was the first discotheque-style nightclub, to be opened in a Strip casino. Yes, Cleopatra’s Barge had already been at Caesars Palace for more than a quarter-century; but the Barge isn’t a club, so much as it’s an open-lounge with a live band. // ***I wonder whatever became of Tara.  (I also wonder if her name wasn't actually Taryn.) // ****Looking back, Joe Strummer might well have been my first rock-star crush.  Not sure what that signifies, but I’m definitely asking my shrink about it, this Thursday]